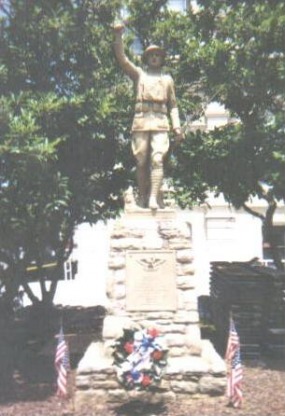 In a small park in front corner of Muskingum County Courthouse at Fourth and Main.

The plaque inscription on the base reads:

(below eagle)
ERECTED BY
THE PEOPLE OF
MUSKINGUM COUNTY
IN RECOGNITION OF THOSE
WHO RENDERED SERVICE
TO OUR COUNTRY
DURING THE WORLD WAR
------------
DEDICATED
NOVEMBER 29, 1934
While the plaque bears a November 29 (Thanksgiving Day) dedication date, dedication was delayed until the following day, November 30.

The VFW post-spearheaded drive to acquire the Doughboy spanned an entire severe depression year, with widespread participation from adults and school children of all grades.

The base is of flint stone that came from Flint Ridge, directly North of Zanesville. When it was built, metal boxes were placed inside containing names of donors, a city directory, copies of The Zanesville Times Recorder, Signal, Sunday Times Signal, and other mementos.

Below is an article from the Zanesville Signal, October 2, 1934. It indicates that subscriptions for funds were still occurring the month before the statue was dedicated. And despite the article's description of the statue as being made of bronze and depicting the older copyright 1920 sheet bronze version, the statue ultimately delivered to Zanesville was Viquesney's new copyright 1934 cast zinc version, which was coated with a thin bronze plating.

In 1936, the Federal Trade Commission banned Viquesney from advertising this model as being made of "cast bronze metal". 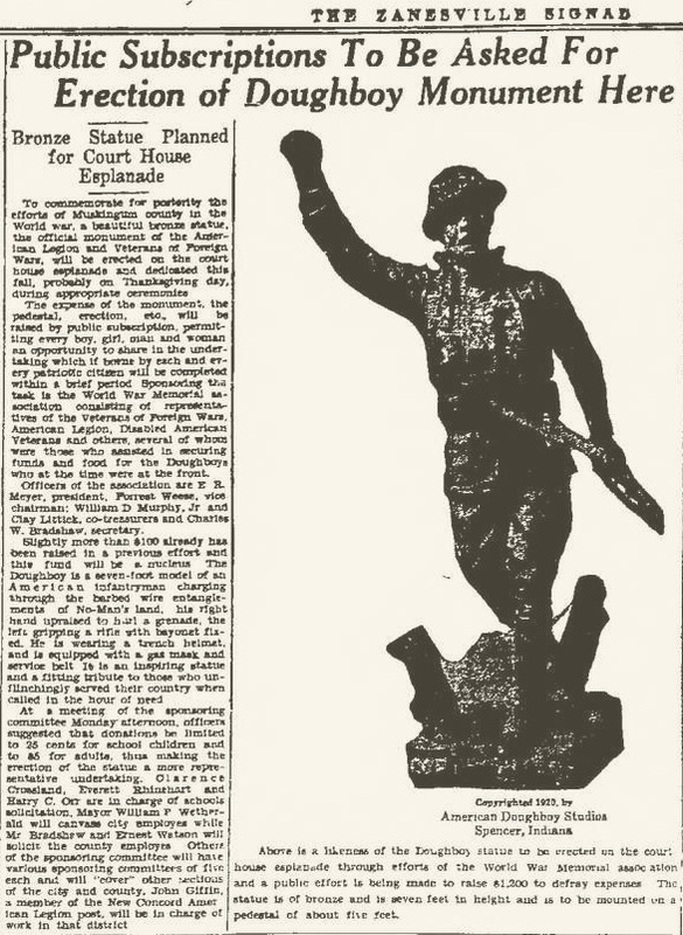