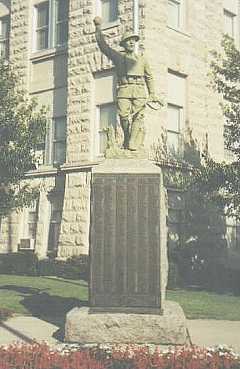 The large plaque inscription on the front of the base reads:

A horizontal plaque inscription in the ledge below the large plaque reads:

The Doughboy, believed to have been funded by the Polk County Court Commission, was dedicated November 11, 1925 in a ceremony in which the Howard Keeling American Legion Post and Boy Scouts played major roles. The parade included veterans and students, a large German Krupp howitzer bearing scars from being hit by Allied guns, and two mounted German machine guns. (The howitzer was at the Doughboy site for many years.) The Doughboy was unveiled by Ruth Keeling, sister of Howard Keeling, a Polk County man who sacrificed his life, for whom the Bolivar American Legion Post was named.

The Doughboy was cleaned in 1991 and has a brown coating. It appears to be in good condition.

A nearby memorial with Army, Navy, Air Force, Marine, and Coast Guard symbols, was dedicated May 27, 1996 to honor those who served in all wars and conflicts.