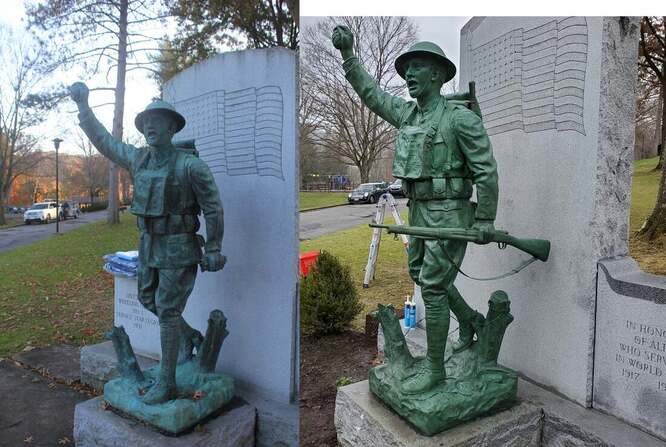 Before 2020 restoration (left) and after. Photos provided by John Hargleroad.

The inscriptions on the lower sides of the cenotaph read:

TO HONOR
OF ALL
WHO SERVED
IN WORLD WAR
1917   -   1918
An American flag is engraved behind the Doughboy on the center of the monument. 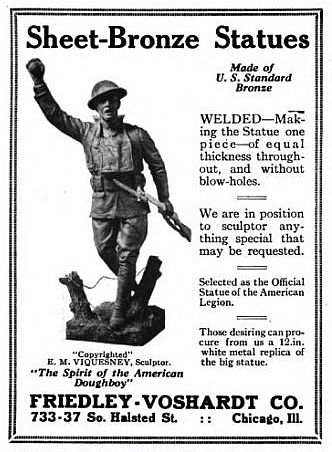 ​A plaque elsewhere on the monument bears the name of the designer, McCurdy's Monument Works, which has led some to assume the Doughboy statue also was forged by them as well. It wasn't. The sheet bronze statue itself was manufactured by Friedley-Voshardt Company of Chicago, Illinois, which produced all of this version of the sheet bronze Viquesney Doughboy found all over the country. 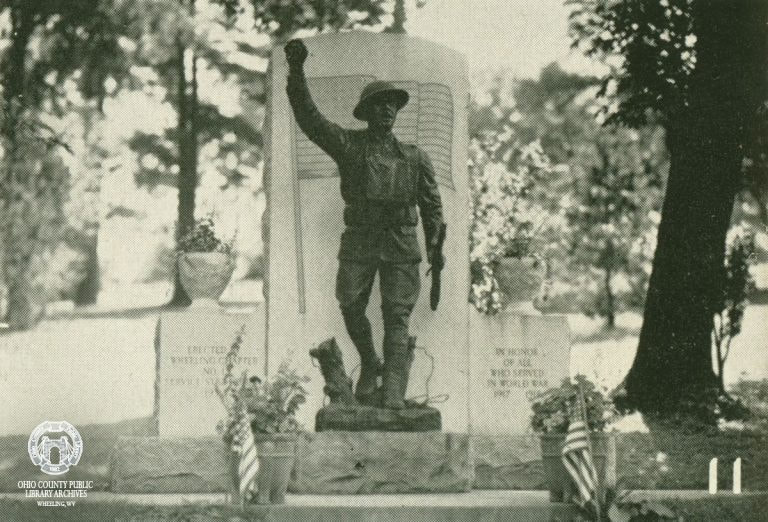 Photo: Ohio County Public Library Archives
The Doughboy was dedicated May 30, 1931. (The date of November 11, 1931, cited in the Smithsonian IAS file is incorrect. Thanks to Seán P. Duffy, Programming, Publicity, & Archives Coordinator, Ohio County Public Library, for the correction.) William J. and Rose Gompers, were the main speakers on the day the statue was unveiled.

The statue is affectionately known locally as "Lester" (named in honor of an actual Doughboy from Wheeling, Wagoner Lester Scott, KIA in WWI).

​A movie featuring the Wheeling Doughboy was released nationwide in early 2012.

In the photo above, taken in the 1930s, the bayonet already appears to be gone, and by the 1940s, almost the entire rifle had disppeared. Until the 2020 restoration, the concrete near the base was cracked and one end of the base had settled about two inches.

Update November 8, 2019: The statue is now off its base and was sent to Detroit, MI, to be restored. It should be back in time for Memorial Day, 2020. The restoration work will be done by Giorgio Gikas at Venus Bronze Works.

Update December 4, 2020: The Wheeling Doughboy was restored and reinstalled, minus the bayonet.