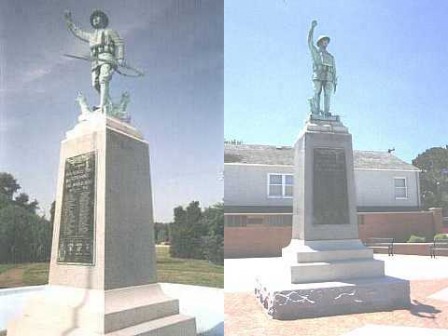 Near intersection of North Park Avenue and West Adams Street.

The left photo was taken at the former Herrin City Park location Northeast of the center of town. The Doughboy was moved in October of 2002 and rededicated the following November 11 at the new location shown on the right in a small downtown plaza area across from City Hall at the corner of North Park Avenue and West Adams Street. A major portion of the move was handled by the National Guard. The plaques honoring veterans were also moved and placed on the wall behind the Doughboy.

IN MEMORY
OF
OUR HEROIC DEAD
VETERANS
OF
THE WORLD WAR
1917 - 1918
(followed by 55 names in two columns; stars designate the 21 killed or died in service.)
Army, Navy, Marine and Nurse emblems are across the bottom of the plaque.
The inscription on a rear plaque reads:

IN MEMORY
OF OUR
HEROIC VETERANS
OF WORLD WAR II
1945

(followed by 45 names in two columns)

THESE MEN
WERE KILLED IN ACTION
OR
DIED IN SERVICE

There is also a special plaque honoring a World War II Congressional Medal of Honor recipient, Private Joseph William Ozbourn, left, who was born in Herrin in 1919. It is now the center plaque on the wall behind the Doughboy.

The text of the plaque appears below:
CONGRESSIONAL MEDAL OF HONOR

FOR CONSPICUOUS GALLANTRY AND INTREPIDITY AT THE RISK OF HIS LIFE ABOVE
AND BEYOND THE CALL OF DUTY AS A MARINE DURING THE BATTLE FOR ENEMY
JAPANESE-HELD TINIAN ISLAND, MARIANAS ISLANDS, 30 JULY 1944. AS A MEMBER OF
A PLATOON ASSIGNED TO THE MISSION OF CLEARING THE REMAINING JAPANESE TROOPS FROM
DUGOUTS AND PILLBOXES AND TREE LINE, PRIVATE OZBOURN, FLANKED BY TWO MEN
ON EITHER SIDE, WAS MOVING FORWARD TO THROW AN ARMED HAND GRENADE INTO A
DUGOUT WHEN A TERRIFIC BLAST FROM THE ENTRANCE SEVERELY WOUNDED THE FOUR
MEN, AND HIMSELF. UNABLE TO THROW THE GRENADE INTO THE DUGOUT, AND WITH
NO PLACE TO THROW IT WITHOUT ENDANGERING THE OTHER MEN, PRIVATE OZBOURN
UNHESITATINGLY GRASPED IT CLOSE TO HIS BODY AND FELL UPON IT, SACRIFICING
HIS OWN LIFE TO ABSORB THE FULL IMPACT OF THE EXPLOSION, BUT SAVING HIS
COMRADES. HIS GREAT PROFESSIONAL VALOR AND UNWAVERING LOYALTY REFLECT THE
HIGHEST CREDIT UPON PRIVATE OZBOURN AND THE UNITED STATES NAVAL
SERVICE. HE GALLANTLY GAVE HIS LIFE FOR HIS COUNTRY.
The above transcription of the official citation doesn’t include Private Ozbourn’s full name.  However, a small plaque just lower on the wall reads:
Pvt. Joseph William Ozbourn
Also, the plaque’s text substitutes the word "Marine" in the second line for the phrase "Browning Automatic Rifleman serving with the 1st Battalion, 23rd Marines, 4th Marine Division"; otherwise the wording is identical to the official citation. 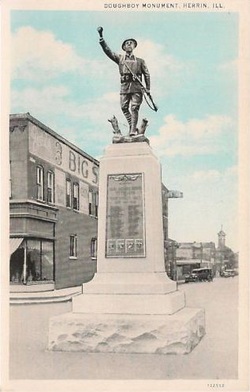 The Doughboy at its original location.
The Doughboy was acquired through a project spearheaded by members of the various veteran groups. It was originally dedicated in Herrin September 6, 1927 in the center of the intersection of Park Avenue and Monroe Streets, in Herrin’s downtown area, as shown in the old postcard view at right.

Due to traffic considerations, the Doughboy and its tall impressive base were moved in 1956 by a house-moving contractor from a nearby town to a temporary location next to the Herrin American Legion post on East Madison Street. They were then moved by the same contractor in September 1964 to Herrin City Park, where the monument was rededicated July 4, 1967. There it stood in the center of a shallow circular pool surrounded by a walk. Along the walk and next to the raised stone sides of the pool were numerous plaques honoring the veterans of World War I and subsequent conflicts, with indications of the wars during which they served.

In October of 2002, the statue's most recent move to its current location across from City Hall occurred. 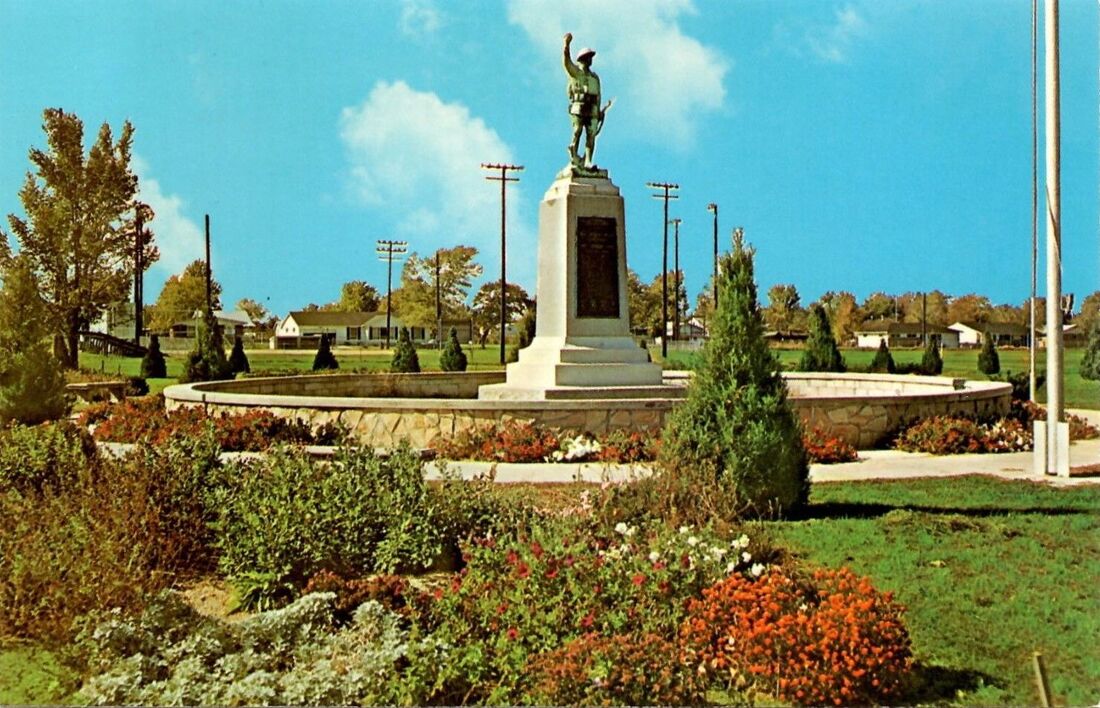 The Doughboy was moved to Herrin City Park in 1964, rededicated in 1967, and then moved again to its current location.

The pride of the people of Herrin for their Doughboy is indicated by the fact that the Bank of Herrin’s first automated teller machine was named "The Doughboy", and the bank has VISA debit cards with an image of the statue.
Update October 25, 2017: The city of Herring is seeking funds to restore the Dougfhboy, which is described as being in deteriorating condition.

Update October 30, 2017: The Herrin Doughboy Committee has chosen Medwedeff Forge & Design, a firm in Murphysboro, Illinois, to do the restoration work.

Update December 26, 2017: Landmarks Illinois has granted the city of Herrin $10,000 to help restore the Doughboy.

Update October 26, 2018: A time capsule in the base was opened. It will be sealed back up, and the Doughboy restoration completed by Veterans Day.

Update June 19, 2020: The Doughboy was damaged by children throwing rocks at it. Estimates of repairs are ongoing.