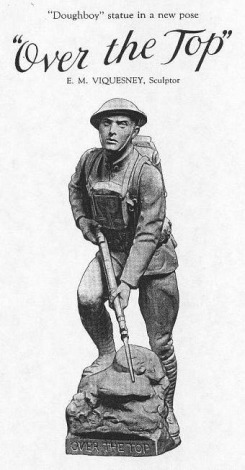 The miniature Viquesney ''Over the Top''.
"The Doughboy statue in a new pose" and "a worthy variation of the original 'Spirit of the American Doughboy'" was how Viquesney described this piece he called "Over the Top", the same title that sculptor John Paulding had used for his own Doughboy statue starting in 1920. The timing of this catalog illustration, published around 1936, even if coincidental, was poor; Paulding died in 1935.

Did Viquesney feel he could get away with using the title now that his major rival Paulding was out of the picture, or did he consider "over the top" to be a common generic WWI phrase that anyone could use? Having already been sued once in 1922 for copyright infringement by the owner of American Art Bronze Foundry, the producer of Paulding's "Over the Top" statues, there was little chance Viquesney couldn't have known this was the same title used by his now-deceased competitor.

The figure is thought by some to be derived from one of the figures from Viquesney's earlier United States Infantry Association Trophy, but the positioning of the legs is reversed (proper right knee forward on "Over the Top"; left knee forward on Infantry Trophy).

The piece is only known to have been produced as a miniature; no documented full-size installation of it can be found anywhere, and despite the glowing reference to it in the 1937 ad below, as surpassing his former success, "The Spirit of the American Doughboy", it was perhaps Viquesney's biggest flop. 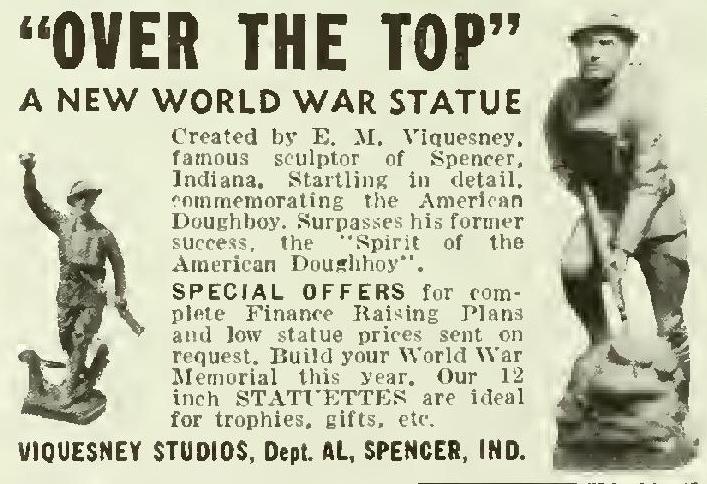