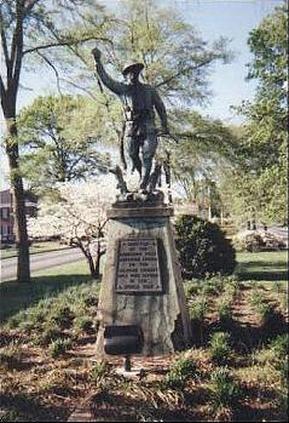 In median in center of Quintard Street between 12th and 13th Street (One of several monuments in the median over a distance of a few blocks).

Dedicated May 30, 1922.  Unveiled by Anniston's Gold Star Mothers, the event was hailed as "the crowning event" of the day, according to the Anniston Star, May 31, 1922. To buy the base for the statue, the local post of the American Legion raised money by sponsoring a minstrel show at the Lyric Theater on April 28, 1922. Lee Brothers Foundry donated the plaque, which was first displayed at Saks Clothing Company before being mounted on the base, probably on November 11, 1922 (estimation based on November 6, 1922 Anniston Star reference).

The bayonet and rifle sling are missing and the sculpture and base were both showing a lot of deterioration in this photo taken in 1999. In 2001, the City of Anniston launched an effort to have the monument restored, but that hadn’t taken place by the spring of 2004.

Update July 13, 2011: The Anniston City Council has voted to request the City Manager look into what would be needed to repair and restore the statue.

Update February 19, 2016: Luis Seixas, a restorer and conservator from Memphis, Tennessee, is undertaking a three-phase restoration of the statue, to be paid for through fundraising efforts. Phase 1 will involve cleaning the surface and evaluating the damage. Phase 2 will involve the removal of more of the patina and reconstruction of the missing bayonet out of fiberglass, epoxy resin, or metal. Phase 3 will remove the rest of the excess patina and treat the surface with chemicals to prevent further corrosion, and fill in cracks with epoxy resin and pigments.