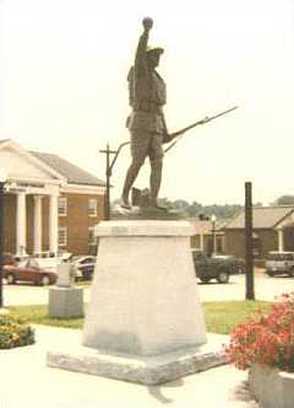 In Monument Square in center of intersection where U. S. 127 makes a 90 degree turn (to left if northbound, to right if southbound) at Cumberland Avenue near Russell County Courthouse and Jamestown city offices in downtown Jamestown.

Pictured above is the original cast zinc Doughboy before it was replaced with a cast bronze replica in 2008.

The engraving across the left, front, and right ledge of the concrete base reads:

IN MEMORY OF THOSE WHO DIED FOR GOD AND COUNTRY

A plaque inscription on the rear of the base reads:

DEDICATED TO THE MEMORY
OF THE PATRIOTIC CITIZENS
OF RUSSELL COUNTY, KENTUCKY
WHO ENTERED THE SERVICE
OF THE COUNTRY
DURING THE WORLD WAR
PRESENTED BY
RUSSELL POST NO. 133
AMERICAN LEGION
NOVEMBER 11, 1937
Since the inscription on the plaque refers to the “WORLD WAR” and the engraving on the concrete base refers to “WORLD WAR I” it’s believed this is not the original base or that the engraving was added later, after World War I had become distinguished from World War II.

World War veteran John Vaughn maintained the monument in an outstanding fashion for many years. After his death, City of Jamestown assumed the maintenance.  In the fall of 2001, consideration was being given to a refurbishment that eventually did occur after the photograph above was taken.
At some time a new plaque was added to the front of the base. It reads:

FOLLOWING IS A LIST OF SERVICE
MEN FROM RUSSELL COUNTY WHO LOST THEIR
LIVES WHILE SERVING THEIR COUNTRY DURING
ONE OF THE WARS AS LISTED.
(Followed by three columns of names from World War I, World War II, Korea, and Vietnam.)

As the original zinc statue was considered too heavily damaged, replacement with a bronze duplicate was completed by Innocast Execuline, the same firm that replaced the New Ulm, Minnesota Doughboy in 1995. The insurance company that covered the vehicle involved in the accident contributed $25,000 to the cost of replacing the Doughboy. The photos above are from the Jamestown Times-Journal, sent to us by R. David Flanagan of Jamestown.

Thanks to "Doughboy Searcher" Harlan Ogle of Monticello, KY, for first alerting us to details of the accident. 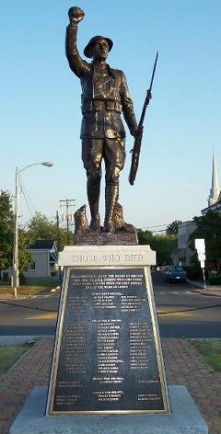 Photo: Jeff Reeder, local American
Legion Post Commander,
Jamestown Kentucky.
Left: The new Doughboy was erected on September 19, 2008, and a rededication ceremony was held on November 11, the 71st aniversary of the original dedication. Sergeant Alvin York, the most decorated U.S. soldier in WWI, was present for the original dedication in 1937. His sons, Andrew and George York, were present at the 2008 rededication, with George York presenting some remarks.

Sadly, in a virtual repeat of 2008, the statue was again hit by a vehicle on December 23, 2018, and once more knocked off its pedestal. And also once again, thanks to Harlan Ogle for the sad news.

​Update May 23, 2019: The repaired statue was returned to its base in time for Memorial Day.

Below: A commemorative ornament featuring the Jamestown Doughboy. Perhaps sold as part of a fundraiser, it's made of "Georgia marble" (a form of limestone).  1,000 were produced; this one is marked number 90 on the back. 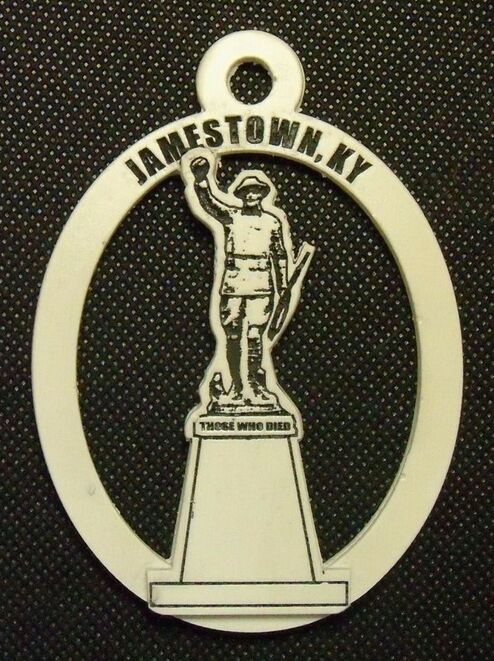