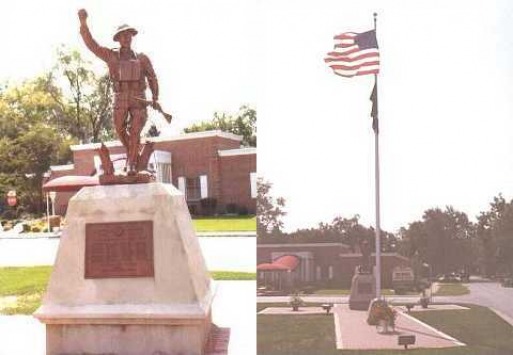 The plaque inscription on the front of the base reads:

A plaque inscription on the Doughboy’s left side reads (under eagle):

The other two columns contain 37 names headed by:

And at the bottom:

Originally dedicated November 11, 1925, at the site of local patriotic observances. It was "witnessed by one of the largest crowds ever assembled in our city", according to a November 13, 1925 article in the Hobart Gazette provided by Rita McBride of the Hobart Historical Society. Two American Legion Post 54 members on horseback were followed by the school band and 1,000 schoolchildren, who marched to the intersection as the event got underway. In an unusual two-city observance, in nearby Gary, Indiana, the moment was heralded with the sound of taps played at the corner of 6th Avenue and Broadway by Leffert Spencer of Hobart, reported the Post-Tribune in its coverage of the event. The City of Gary stood still for two minutes in memory of those who gave their lives and to honor those who came home. The Post-Tribune shut down its machinery and every member of every department joined the rest of the city in paying tribute by facing east toward the battlefields of France. In Hobart, a proclamation was issued the previous week by Mayor Pro-Tem David Livingstone at the request of the American Legion commander C.J. McGinnis requesting all city businesses to close that day from 2 to 6 p.m. in anticipation of the "Doughboy's" dedication ceremony.

The Doughboy has always been well-maintained. The front plaque was placed after World War II since it lists the names from that war. It is not known if there was an earlier plaque. In February 1989, the statue's left hand and rifle went missing, but later turned up near Lakes of the Four Seasons and were reattached, according to information provided by McBride (the rifle is still missing the sling, however). In 2001, Hobart refurbished the statue and renovated the landscaping around the pedestal to include memorial paver bricks and a new flagpole (mounted on a smaller, identical version of the statue's base), according to Linda Buzinec, Hobart mayor from 1996 to 2007. "Boyd Construction did the foundation and the bricks, with the landscaping done primarily by volunteers and the efforts of Post 54 and member Gerry Kegelbein. That was about a $20,000 project," said Buzinec. "It would have been another $27,000 to repaint the statue." Instead, Buzinec's husband, George, owner of the Performance Auto Service in Hobart, repainted it. "He mixed the copper paint and matched it." In 2002 a rededication ceremony was held.

In May of 2006, the statue was removed for repairs and replaced on its pedestal in time for Memorial Day. The repairs were again done by Boyd Construction in Hobart. The city still sells memorial bricks twice a year. The parks department maintains the landscaping and replaces the flags about three times a year depending on the wear and tear.

On the last Friday every month a ceremony is held at 5:00 p.m. at the Doughboy to honor those U.S. service members recently killed in the Afghanistan or Iraq wars. Howlin' Mad Detachment 93 of the Marine Corps League is responsible for conducting the ceremony. The rank, name, and home state of those who have given their lives are read aloud, and a bell rung. The ceremony ends with a three-round volley fired by the honor guard, and the playing of Taps.

Update June 6, 2016: There was an automobile crash involving the monument. The statue itself was not damaged, but the crash caused extensive damage to the statue’s concrete base and the flagpole. Property damage was estimated at around $19,000. The driver of the car, Tony Lazoroski, 24, struck the doughboy monument about 2 a.m. June 6. He died of his injuries the following June 18. 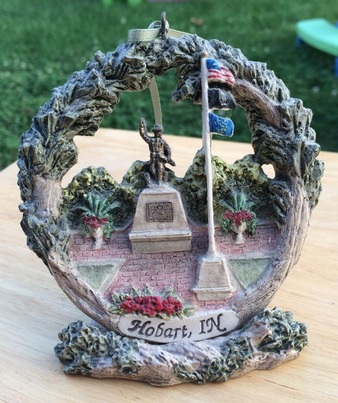 Photo: eBay.
At left is a 2002 Christmas ornament of the Hobart, Indiana Doughboy issued as a fundraising item. 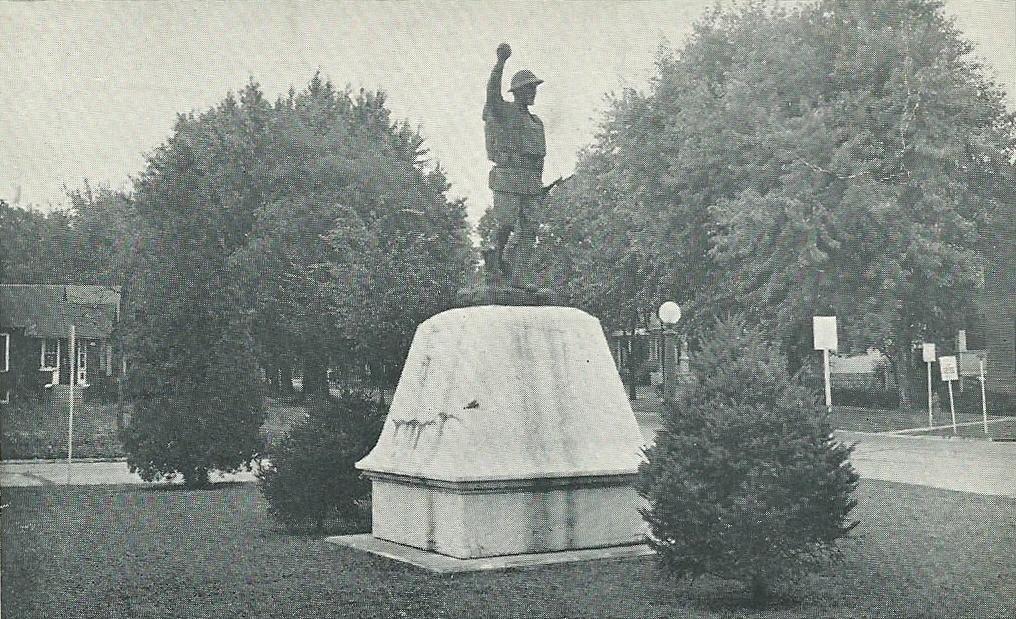