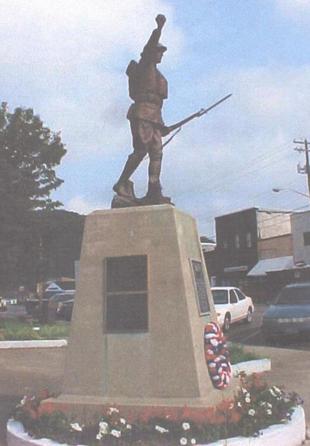 The inscription on the plaque on the front of the concrete base reads:

DEDICATED TO
THE MEMORY OF OUR COMRADES
WHO ENTERED THE SERVICE
OF THEIR COUNTRY
FROM CASEY COUNTY, KENTUCKY
AND WHO GAVE THEIR LIVES
IN THE WORLD WAR.
ERECTED BY THE CITIZENS OF
CASEY CO. AND ELSEWHERE
UNDER AUSPICES OF
CASEY POST NO. 78, AMERICAN LEGION
NOVEMBER 11, 1935

An inscription on a plaque on the back of the base reads:

This statue should not be confused with another WWI Doughboy monument in the town of West Liberty, Kentucky, a completely different location 139 miles away from (and actually to the east of) Liberty. The West Liberty Doughboy is an entirely different sculpture by a different artist, in a different pose, and composed of marble.

Liberty is in Casey County, Kentucky, birth county of T. Perry Wesley, the Spencer, Indiana resident who, while he was living, was the most knowledgeable person about the sculptor, E. M. Viquesney, and of information about the “Spirit Of The American Doughboy” and the locations of its replicas across the nation. The Doughboy wasn’t placed in Liberty until many years after Mr. Wesley had left Casey County, though. 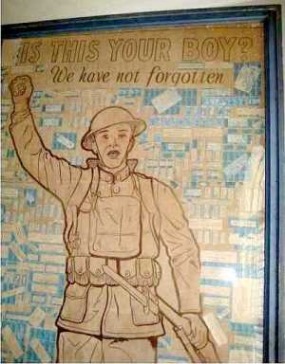 Photo: Liberty Kentucky Mayor
Steve Sweeney.
Left: A detail of a Viquesney fundraising poster. It was found intact in an old barn and still bears the names of donors pasted to it. The poster is now on display in the Liberty, Kentucky City Hall. A similar poster was mounted on the office wall of original Viquesney Doughboy researcher T. Perry Wesley.