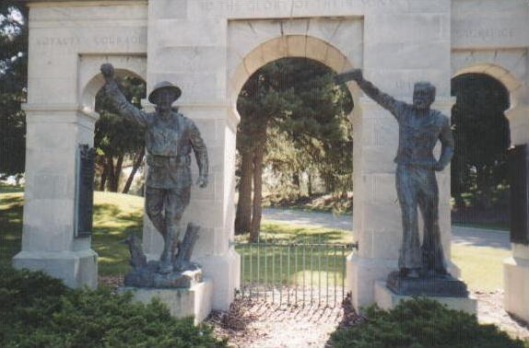 Photo provided by Phil Bennett of the Fort Wayne Parks and Recreation Department.

The monument consists of a triple arch system with many plaques and engravings in several locations.  The major ones read:
ALLEN COUNTY AND FORT WAYNE
THEIR TRIBUTE
TO THE GLORY OF THEIR SONS

No significant refurbishment has been performed since 1993. Except for the fact that the Doughboy’s rifle, bayonet, and the barbed wire at his feet are missing, and the fact that some cleaning would help, both sculptures are reported to be in good condition.

The memorial cost $40,000 in 1928 and was probably the most costly of all that were erected during Viquesney’s lifetime. It was designed by Captain John K. Shawvan and constructed by the Muldoon Monument Company of Louisville, Kentucky.

A picture of the memorial was included in a Viquesney promotional brochure.

Five other metal "Spirit of the American Navy" sculptures accompany Viquesney Doughboys at Kingman, Arizona; Clearwater, Florida; Naperville, Illinois; Granite and Hobart, Oklahoma; and a stone version at Crowell, Texas. A similar tribute to the Navy, titled "Sailor", occurs at Palatka, Florida, but although placed by Viquesney, it was not sculpted by him.

Update May 5, 2017: A proposal by Indiana Tech and the city to build extensive athletic facilities in the Memorial Park will threaten the monument, one of only eight in the country that honors both the Army and Navy with two Viquesney statues.

Update October 27, 2017: Memorial Park's WWI Memorial Grove is set to get 71 new trees just a few months after a public outcry compelled Indiana Tech and the city to abandon its plans to build athletic facilities in the park.