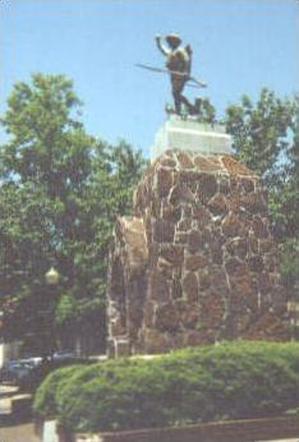 On top of a large monument on a triangular plot (now known as Dumont Plaza) bounded by 6th Street, 7th Street and 23rd Avenue, across the street from Trustmark Bank in Downtown Meridian.

An intricate grilled door with a large American Legion emblem encloses the original plaque, which reads:

WHO PATRIOTICALLY
ANSWERED THE CALL
OF OUR COUNTRY
TO UPHOLD JUSTICE
AND THE RIGHTS
OF HUMANITY
AND IN LOVING
REMEMBRANCE OF
THOSE WHO THEREIN
MADE THE
SUPREME SACRIFICE
The Smithsonian record misquotes the plaque (omitting the word "THEREIN"), and the word "SACRIFICE" is stated to be misspelled as "SCARIFICE". A photograph of the plaque shows all words included and spelled correctly.
A marker at the base of a nearby tree has an inscription that reads:

The Doughboy was dedicated by the T. C. Carter American Legion Post #21 November 11, 1927.  There is a small cannon on the triangular base immediately in front of the monument. A reference at the Meridian Historic Preservation Commission website lists the monument as having been built "ca. 1918". If so, it means the monument base was built first, and the statue added in 1927. And as can be deduced from reading the original plaque inscription above, the monument was not specifically dedicated to Thomas Clay Carter, as stated by this website. It was the Legion Post that was named and dedicated to him.

The statue stands within the Meridian Downtown Historic District, included in the National Register of Historic Places. 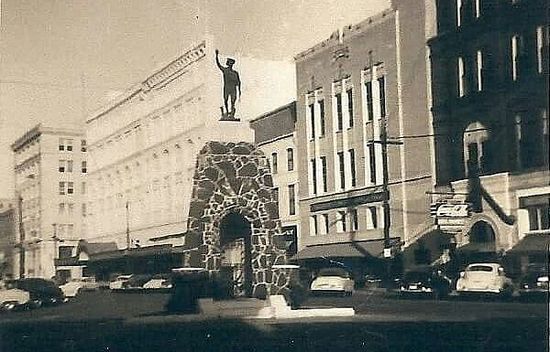 An old photo of the Meridian Doughboy, circa 1940s. 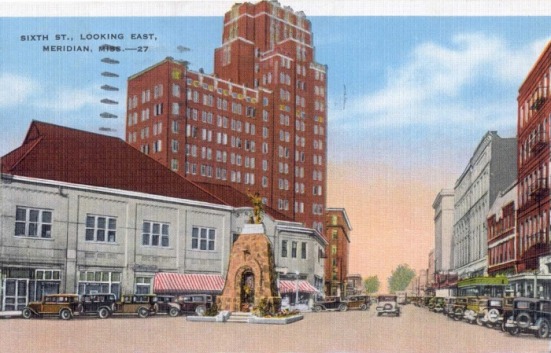 An old postcard view of the monument, with the impressive Threefoot Building in the background.