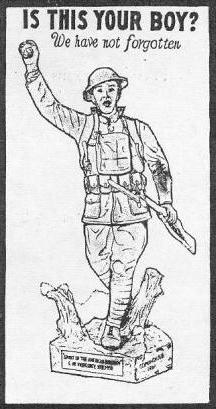 Have one of these in your state below? We're interested.

Despite Viquesney's claim in many of his ads that "over 300" of his "Spirit of the American Doughboy" memorials could be found across the country, and that at least one could be found "in every state of the Union", none, nor any record of one, has ever been found in the states of California, Delaware, Louisiana, North Dakota, New Hampshire, New Mexico, Nevada, Oregon, or Rhode Island. Thus, it would be of major interest to this website if anyone could find a Viquesney "Spirit of the American Doughboy", or even any other WWI or WWII monument by him in any of these states.

Some of these states, Oregon in particular, have WWI statues by Viquesney's main rival, John Paulding, which bear a resemblance to Viquesney's work from certain angles. There is also a "ringer" in New Orleans, Louisiana, cast in 1970, long after Viquesney's death. It has a similar pose, but lacks the characteristic two tree stumps on the base.

There were no "Spirit of the American Doughboy" statues placed outside the "lower 48" United States, i. e., Alaska and Hawai'i, which weren't states yet during Viquesney's lifetime, nor in any foreign countries, although the French Government bought and presented a Viquesney Doughboy to the town of Swanton, Ohio.