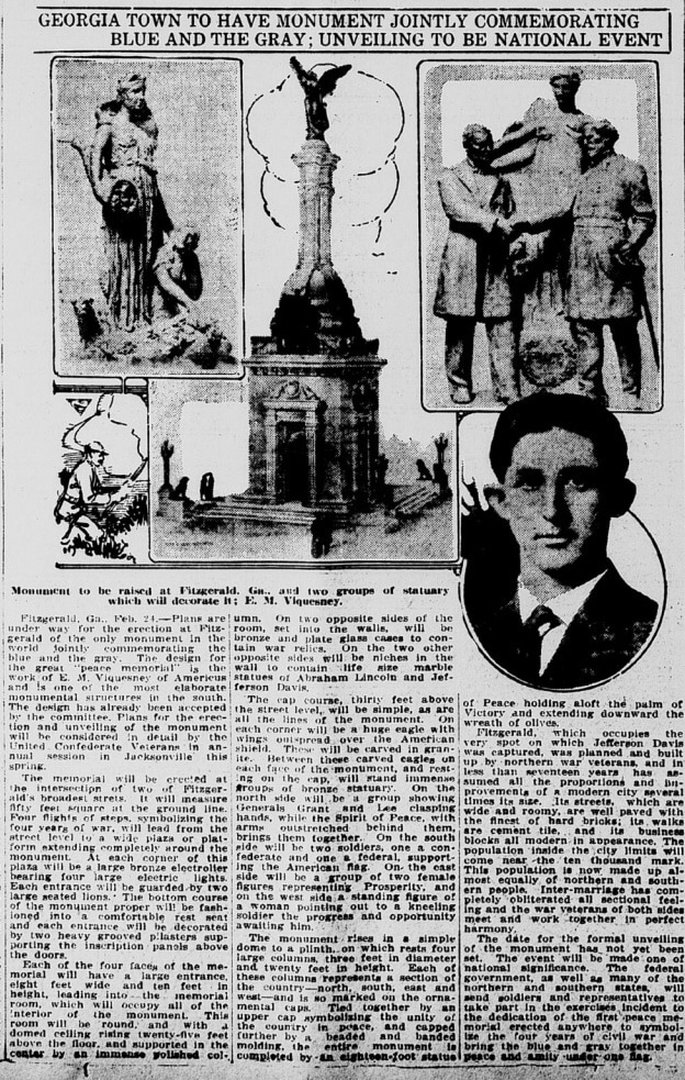 Evening Times, Grand Forks, North Dakota, 2/28/1914.
E. M. Viquesney moved to Americus, Georgia in 1905 to work on the Civil War Union state memorials at Andersonville National Cemetery, and Confederate memorials elsewhere. He was employed at both C. J. Clark's Monumental Works and Schneider Marble for that purpose, and may also have been affiliated with the products of McNeel Marble of Marietta.

Two of the Civil War memorials which Viquesney is known to have designed during this period are the Soldiers and Sailors Monument (1911-1913) at Wichita, Kansas, and The Blue and the Gray Monument(1914), designed by Viquesney for the town of Fitzgerald, Georgia, but due to funding problems, never built.

He also designed two monuments to the women of the Confederacy at Macon and Rome, Georgia.

At this stage of his career, Viquesney was the designer, but not the sculptor of these monuments. 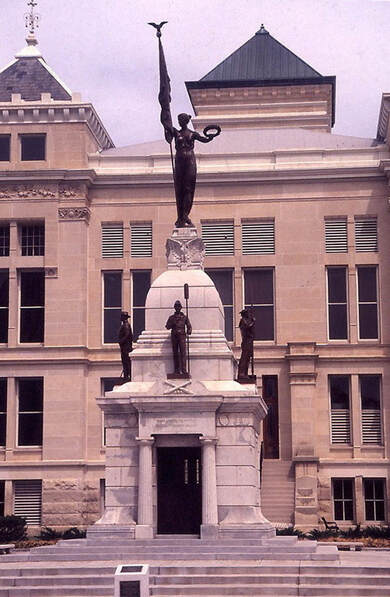 Soldiers and Sailors Monument, Sedgwick County Courthouse, Wichita, Kansas. Photo: Wikipedia.
Above: Long before Viquesney became famous for his "Spirit of the American Doughboy", he was already well-known as a sculptor, having designed many Civil War memorials and monuments.  One of these is the vault structure that stands in front of Sedgwick County Courthouse, Wichita, Kansas.  Plans began in 1911, and the monument was dedicated June 14, 1913.  The design and plans for the monument were drawn by Viquesney.  The contract for the monument was awarded to Woodbury Granite Company of Hardwick, Vermont.  The four lower statues, representing Union soldiers and sailors, were designed and cast by Frederick C. Hibbard of Chicago, Illinois, and the large statue on top, representing Peace, was provided  by W. H. Mullins of Salem, Ohio.  The foundation was built under separate contract by J. W. Burton.

Originally the vault housed a small military museum display behind the front doors, but problems with dampness forced Grand Army of the Republic officials to move the collection of paper records and relics to the new Carnegie Library in 1915.

The monument was included on the National Register of Historic Places in 1998 (the Register application form erroneously lists the architect's name as Ernest "Monroe" Viquesney instead of his correct middle name, Moore).

Below: Viquesney's monuments to the women of the Confederacy at Macon and Rome, Georgia.
In a brochure from around 1935, Viquesney showcased a miniature based on one of the statue groups above. Unfortunately, the text leads the reader to believe that Viquesney himself sculpted the works above, but the figures were done by another artist, John Wolz.