In median at intersection of Whaley Street and Wayne Street (where it changes to Olympia Avenue) in the Olympia section of Columbia, South Carolina.

DEDICATED TO
THE MEMORY OF OUR COMRADES
WHO GAVE THEIR LIVES IN
THE WORLD WAR
-----------------
PRESENTED BY
THE PEOPLE OF THE PACIFIC COMMUNITY
NOVEMBER 11, 1930
(followed by list of 11 names, one of which is designated as "colored")

An inscription on a plaque on the rear side reads:

The “Pacific Community” was a Columbia area near Pacific Mills, a textile mill. The cost of the Doughboy and the base was raised in a campaign with committee members in each mill department.  All committee members were listed in the May-June 1930 edition of “The Spinner” a Pacific Mills house organ. The acquisition was a joint idea of four men, shown below. From the left, they are Fred B. Spigner and son Jack, W. R. (Bill) Connelly and daughter Julia Ann, John H. Nickhols and Nancy Hammond, daughter of Mr. & Mrs. R. R. Hammond and grandaughter of W. P. Hamrick, and John J. Lever and daughter, Nell. The dedication ceremony was attended by the governor of South Carolina, mayor of Columbia, and state American Legion commander. 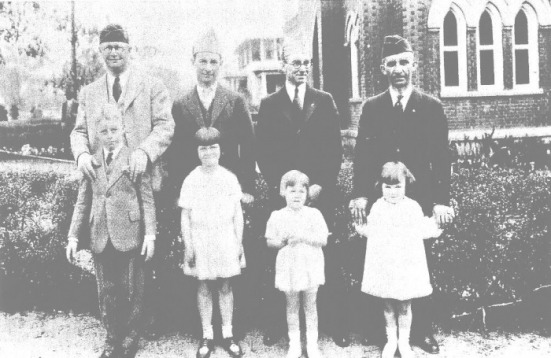 Photo from an old local tour guide provided by Rupert Renz of Richland American Legion Post No. 5.
A cast bronze replica of the Doughboy made from molds made from Clearwater, Florida’s Doughboy, was dedicated in Columbia’s Memorial Park, November 11, 2002, so the Columbia area now has two Viquesney Doughboys, an original and a copy.
​
On October 21, 2014, the Columbia City Council honored resident Larry Gates in part for his help in the 2002 restoration of the statue by approving a resolution for the honorary naming of the 100 block of Wayne Street, between Whaley Street and Heyward Street, as Larry Gates Way.