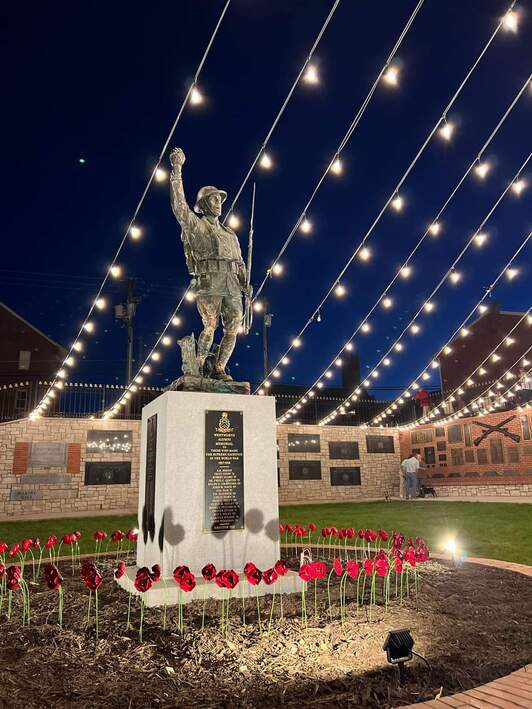 Formerly on walkway by Groendyke Hall on grounds of Wentworth Military Academy. Since the closure of the school in May of 2017, the statue was first moved inside the old Wentworth Military Academy Museum, then moved in front of the Lafayette County Courthouse, and now stands in new Wentworth Park near the West corner of Main and 14th Streets, south of the T-intersection. A Styrofoam replica now stands inside the new museum.

The plaque inscription below the academy shield reads:

“Spirit of the American Doughboy”

“This statue, this child of my greatest
and most sincere effort, is dedicated
to you America…”
E. M. Viquesney

The Doughboy was a gift of the Wentworth Alumni Association. Plans to purchase the statue were approved in a November 11, 1921 meeting with a miniature statuette serving as the centerpiece for the table. The Doughboy arrived on campus in the week of November 22, 1922 and was dedicated June 10, 1923 during commencement activities. The dedication ceremony was presided over by J. G. Crenshaw ’85, President of the Alumni Association. The principal speaker was Hon. H. F. Blackwell ’98. The statue was unveiled by the Lee’s Summit, Missouri mother of Robert Clore ’15, the first son of Wentworth to lay down his life (in the battle of Chateau Theirry), and for whom the Lee’s Summit American Legion Post is named.

Since that time, many school traditions have arisen regarding the Doughboy, one of which is that first semester cadets must salute him from a distance of about 12 yards when they approach him from either direction and must never walk behind him.

The Doughboy was frequently restored and/or repaired through the years. The bayonet was replaced in the 1980s and an arm was repaired in 1997. In 2000, a former cadet performed substantial cleaning on the sculpture and base.

In early 2002, the Doughboy was removed from its pedestal and placed on exhibition at Kansas City, Missouri’s Liberty Memorial, the nation’s largest World War I monument, while funds were raised to restore and clean the Doughboy. It was replaced for at least part of the restoration period by a paper replica to be saluted by first semester cadets.

While researching Wentworth Archives during the restoration period, a file was found containing about 50 letters received in 1922 from former cadets in response to the original fundraising campaign.

After an extensive 2003-4 fundraising campaign, which included participation by cadets who hiked from Lexington to Kansas City’s Liberty Memorial as a fundraising promotion, the Doughboy was restored by Jensen Conservation Services of Omaha and rededicated during Wentworth’s 125th Anniversary Homecoming activities on October 2, 2004. 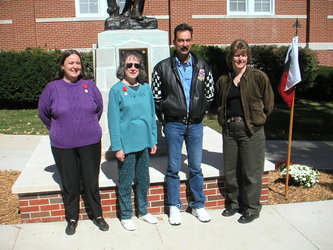 Viquesney relatives at the 10/2/2004 re-dedication.
The rededication ceremony was presided over by Capt. Mark Mullenioux ’78, Wentworth Public Affairs Officer, and included participation by Major General John Little ’61, Wentworth Superintendent/President, the Wentworth Color Guard, the Leavenwoth, Kansas High School JROTC Color Guard attired in World War Doughboy uniforms (with a WWI vintage 48 star flag), together with their Senior ROTC instructor, LTC Ed Kennedy, four Viquesney relatives (pictured at right), Cathie Schoppenhorst of Marthasville, Missouri, Denise Viquesney Bradley and Mr. and Mrs. Bud Bradley of the Kansas City area, Doran Cart, Liberty Memorial Curator, the Color Guard of the Lee’s Summit Robert L. Clore American Legion Post No. 189, and Post Commander, Roy Nelson, Wentworth alumnus whose special assistance enabled a new base to be provided and the pedestal restored, and 16 cadets who gave presentations recognizing each of the 16 Wentworth alumnus lost during the war. (In that regard, there are only 14 names on the original plaque. The two omitted names, which were not known at the time that plaque was made, have been placed on a new plaque on the back of the pedestal.) Alumni Chairman, Al McCormick ’67, of Parkville, Missouri, played a major role in all activities of the day.

The rededication and unveiling of the front plaque were performed by Viquesney family member Cathie Schoppenhorst and Lee’s Summit Robert F. Clore American Legion Post Commander Roy Nelson. The new plaque on the rear of the pedestal was unveiled by Wentworth Alumnus Judd Douglas and Cadet Major Matt Rosen. The ceremony was concluded by a 21-gun salute and a rendition of Taps by Capt. Gary Love.

During the ceremony, many of those named in the preceding paragraphs, including the Viquesney family members, Doughboy searchers Earl Goldsmith of The Woodlands, Texas and Les Kopel of Oxnard, California were presented with the Wentworth Doughboy Medal.  Formerly awarded to each year's top student cadet, the medal was retired; the individuals named above received the last ones made. 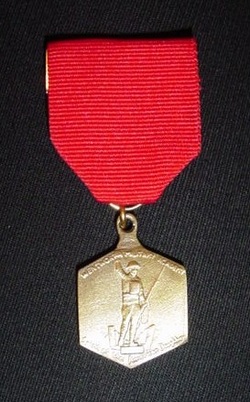 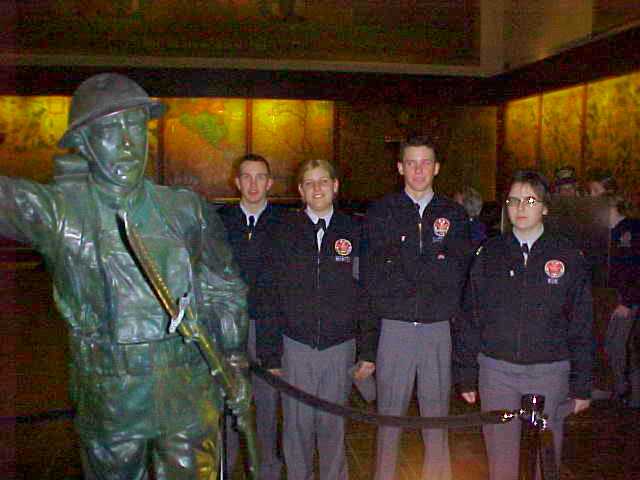 A picture of the 1923 groundbreaking ceremony for Wentworth’s Doughboy. The Doughboy arrived in November 1922. The ground-breaking took place later during that school year, and the Doughboy was dedicated during Commencement activities, June 10, 1923. Alumni Association President, J. G. Crenshaw ’85, presided at the groundbreaking. Col. E. N. Hopkins is shown delivering the address. 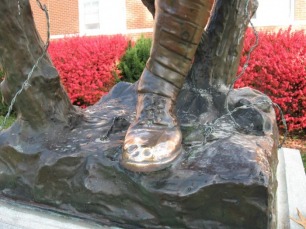 Photo: Al McCormick, Parkville, Missouri.
Sometime during November, 2009, a somewhat naive cadet heard that he could work off demerits by polishing the boots of the Doughboy.  The result is the damage shown here:  The tip of the left boot was completely scrubbed clean of its protective anti-corrosion coating down to bare metal. The cadet and one other owned up to the prank.
Update April 7, 2017: It is with great sadness we report that Wentworth Military Academy will be closing on May 31, 2017. The fate of its resident Doughboy statue is unknown at this point. Stay tuned for further details.

Update September 13, 2017: The Doughboy is to be sold at auction in Lexington on October 7 by Oldham Auctions to help pay off the school's debts to the bank.The Wentworth Military Academy Alumni Association filed a petition in Lafayette County Circuit Court last August seeking a temporary restraining order to stop the sale of the Doughboy, claiming that the alumni, not the school, are the rightful owners. A hearing is set for Tuesday, Sept. 19, in Lexington.

Update September 20, 2017: The hearing went in favor of the Alumni Association, saving the Doughboy from the auction block.

Update, October 6, 2018: The statue was moved from the old museum and rededicated in front of the Lafayette County courthouse.