Located in a tiny memorial area on west side of North Main, in 500 block, next to the First Baptist Church (509 North Main).

The Smithsonian records list the address incorrectly as 800 North Main.

The photos show a Doughboy and one of Viquesney’s “Spirit of the American Navy” sculptures that accompany Doughboys in seven locations. Both were dedicated on May 30, 1929.

The tall center stone contains an engraving that reads:

THESE
GAVE ALL
(followed by 23 names)

The large horizontal marker is engraved on both sides and reads:

The plaques on the two bases contain a continuous engraved message providing the following more descriptive information:
Under the Doughboy:

THESE BRONZE STATUES WERE FIRST CREA-
TED BY E. M. VIQUESNEY FROM INDIANA AT A
TOTAL COST OF $2500 FOR THE TWO.  THE
STATUES WERE REMOVED FROM THE
KIOWA/GREER CO. BRIDGE IN THE 60’S BE-
CAUSE OF SEVERE MUTILATION AND WERE
STORED THROUGH THE EFFORTS OF REINHART
GRAUMANN.  A GRANT WAS RECEIVED FROM
AID ASSOCIATIONS FOR LUTHERANS, AND THE
GRANITE COMMUNITY CONTRACTED JAMES A.
PITT, SCULPTOR, TO RESTORE THIS WORLD
WAR I BRONZE DOUGHBOY AND SAILOR AT
THE TOTAL COST OF $6000.  THIS BRONZE
DOUGHBOY IS HEREBY REDEDICATED TO
THOSE WHO SERVED IN WORLD WAR I.
NOV. 10, 1979

GOVERNOR HOLLOWAY WAS TO PRESIDE AT
THE DEDICATION SERVICES OF THESE
STATUES MAY 30TH, 1929, BUT
BECAUSE OF MUDDY ROADS IN UNION
CITY, DID NOT MAKE IT TO THE CERE-
MONY.  REV. MOODY NICHOLSAN, VICE-
COMMANDER IN CHARGE OF THE
AMERICAN LEGION THEN PRESENTED THE
MEMORIAL ADDRESS. THIS BRONZE SAILOR
IS HEREBY REDEDICATED TO THOSE WHO
SERVED IN WORLD WAR I
NOV. 10, 1979
Although the statues are described as "bronze" in the plaque texts above, it is now known that all of Viquesney's original so-called "bronze" version of his Doughboy copyrighted 1920 (and the 1927 sailor) are actually pressed sheet bronze sections welded together over an internal frame, and produced by the Friedley-Voshardt Company of Chicago, IL. They are not cast bronze, as many of Viquesney's customers assumed. 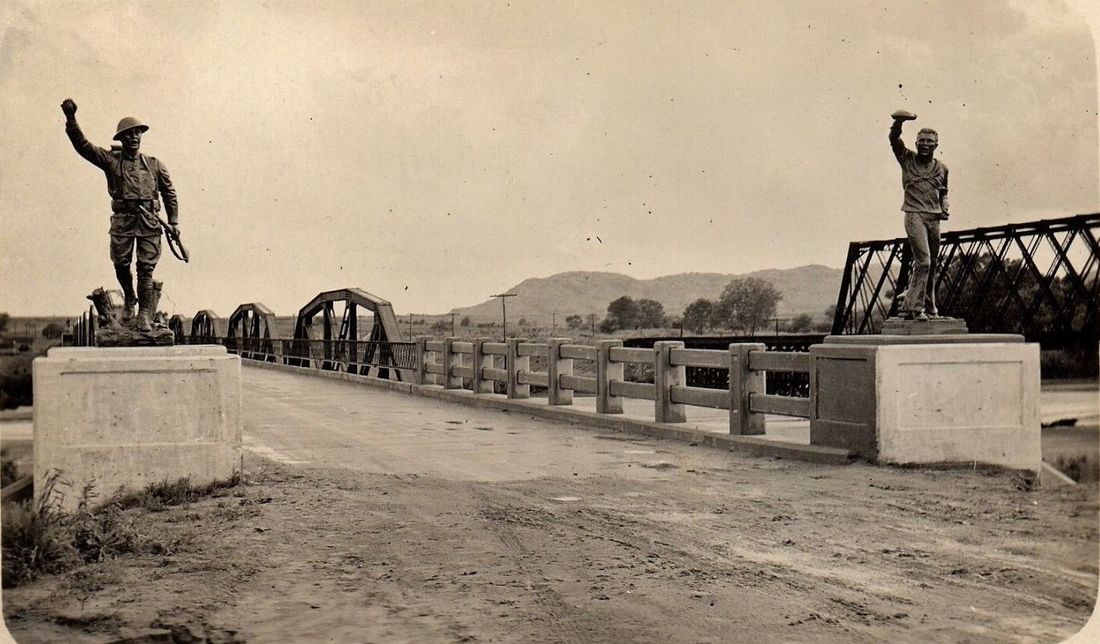 Undated postcard showing original location at Greer County end of bridge connecting Greer and Kiowa Counties.
The original location of these two sculptures was about two miles East of Granite at the Greer County end of a bridge over the North Fork of the Red River, the county line between Greer and Kiowa Counties. Two identical sculptures were placed at the Kiowa County end of the bridge in a joint project with the citizens of Hobart, Oklahoma. The Oklahoma legislature had designated the bridge, which has subsequently been replaced, as a memorial to dead soldier heroes of Oklahoma. The four sculptures cost $5,600. Commissioners of each county furnished $2,500 and the Granite and Hobart American Legion posts paid the rest.

Five other metal "Spirit of the American Navy" sculptures accompany Viquesney Doughboys at Kingman, Arizona; Clearwater, Florida; Fort Wayne, Indiana; Naperville, Illinois; Hobart, Oklahoma; and a stone version at Crowell, Texas. A similar tribute to the Navy, titled "Sailor", occurs at Palatka, Florida, but although placed by Viquesney, it was not sculpted by him, although it was produced by Friedley-Voshardt, the same company that produced the Doughboy.

Update November 11, 2018: The statues were sent to The Crucible Foundry & Gallery located in Norman, OK, and are now back on their pedestals, fully restored.