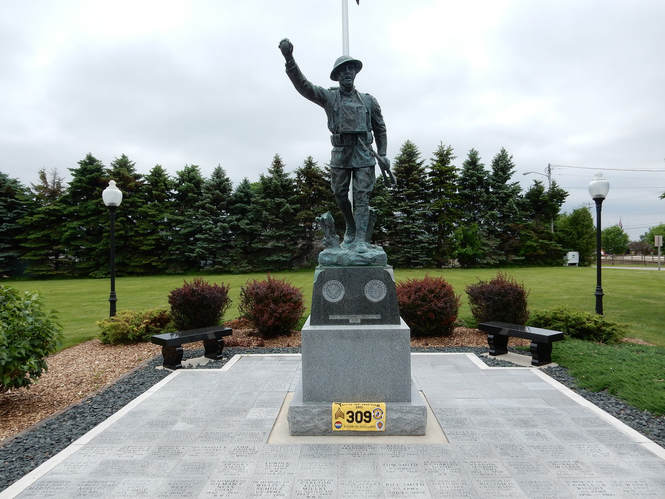 Shown above at its new location in Grand River Memorial Park, in an area known as North Terrace on the grounds of Markesan Resident Home, 1130 North Margaret Street.

Originally the sole engraving on the base read:

ERECTED BY AUGUST F. HEIN
1946
After the 2009 restoration, six circular engravings were added to the base, denoting the branches of the U.S. Armed Forces: Army and Air Force on the front; .Navy and Marines on the proper left; and Merchant Marines and Coast Guard on the proper right. 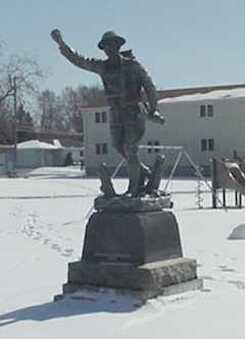 Doughboy at original location in Hein Park. Photo: Rick Slate.
Although it had been reported as a Viquesney Doughboy to T. Perry Wesley in 1991, the first photos of this “Spirit of The American Doughboy” were sent to us in 2005 when Markesan Mayor, Rick Slate, contacted us seeking information. According to Mayor Slate, the Doughboy was purchased by August F. Hein from another community and placed in Markesan. How or where Mr. Hein acquired the statue is unknown. Also, nobody knows what date in 1946 the statue was installed.

August F. Hein was a well-to-do local businessman and much interested in Markesan's welfare, donating both Hein Park and the Doughboy to the town shortly before his death in 1947.
​
​Originally standing in Hen Park, in 2007 the statue was moved to Grand River Memorial Park, and is now under the care of American Legion Post #282. The Doughboy was restored and rededicated in the summer of 2009, Before the restoration, most of the rifle was missing. The statue and its original stone base are now mounted atop a new pedestal outside the North Terrace area of the Resident Home grounds. (North Terrace is actually at the south end of the Home complex; it refers to the fact that the section of property is on the north side of town.)

Attempts to learn the identity of the community from which the Doughboy was purchased, if indeed that was the case, have not been successful. It may even be possible that Mr. Hein purchased the statue directly from the manufacturer, Friedley-Voshardt Company of Chicago, Il, as the company was known to have kept the original molds for this model after Viquesney had switched to another manufacturer in 1934.

Our thanks to the Markesan Historical Society and Nicole Overbeck at the Markesan Public Library for their background research on August F. Hein.