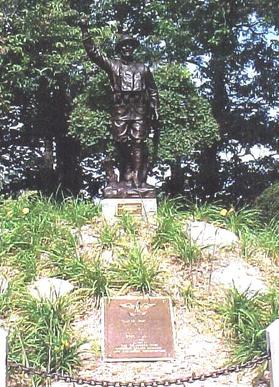 On landscaped mound by a walkway in Lake Bluff Park, at head of "T" intersection of Lake Boulevard and Market Street.

The inscription on the plaque on the mound reads:

The inscription on the plaque on the base of the sculpture reads:

REFURBISHED BY THE
STEVENSVILLE AMERICAN LEGION
AUXILIARY UNIT 568
MAY 1998
(Refers to the new left arm and rifle attached in 1997 and conservation through Spring of 1998 by Venus Bronze Works, Detroit, Michigan.) The Krasl Art Center was largely involved with the restoration.

Prior to the 1998 refurbishment, the rifle was missing and shrubs on the mound were somewhat larger.  The rifle and bayonet were restored and mound was re-landscaped in the refurbishment project. The Doughboy is in excellent condition. 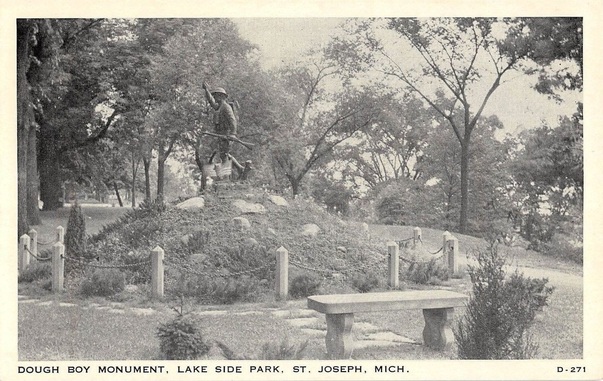 An old postcard photo of the St. Joseph, Michigan Doughboy.
The simple earh mound setting was one of Viquesney's favorites.
﻿Above: An old undated postcard image shows the bayonet and rifle sling already missing.﻿
Update March 14, 2018: A request by the Algonquin Chapter of the Daughters of the American Revolution to move the plaque behind the Doughboy to a more visible location and add a flagpole has been approved by St. Joseph city commissioners.

Update September 22, 2018: Gloria Mance and Sylvia Lieberg, retiring members of the St. Joseph Parks Advisory Board, along with the Daughters of the American Revolution have erected a stone wall to display the plaque listing the county’s World War I casualties. The plaque had previously been located at ground level behind the Doughboy Statue. The plaque will be re-dedicated on Nov. 11, the 100th anniversary of the end of the Great War.