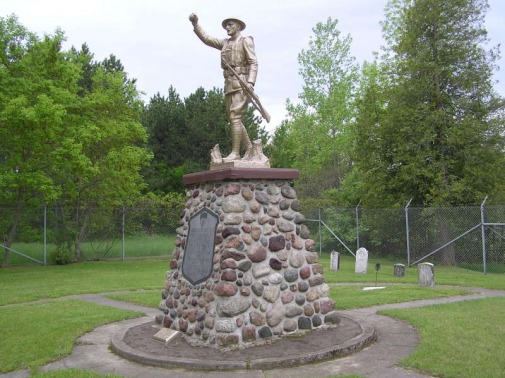 In southwest corner of Riverside Cemetery, north of town off 493 County Road RW, and near Ogden Avenue.

There is a large plaque on the front of the base, which reads:

Knowledge of this Doughboy surfaced in the Spring of 2004 when I discovered an article from the Peshtigo Times by Justin Rioelle about a restoration in process. However, the piece had been listed in the Smithsonian Inventory of American Sculpture (IAS) since at least 1995, but the sculptor was (and still is) listed as unknown.

According to the article, funds for the original purchase and 1936 dedication were raised by the Peshtigo Women’s Relief Corps and the Carlson-Alguire Post 312 and its auxiliary.

At the time of the article, the Doughboy was missing its left hand and rifle. Funds for the 2004 restoration were being provided by DAV Post 42 of Marinette, the VFW Post of Pestigo, and the Peshtigo American Legion Post 312 Auxiliary. The restoration, which included replacing the hand and rifle, was completed by May 31, 2004. The bayonet apparently was not included in the restoration.

Special thanks to Mary Beth Noonan Jensen of Lena, Wisconsin, and her brother Mike Noonan, Marinette, Wisconsin, for the photograph.