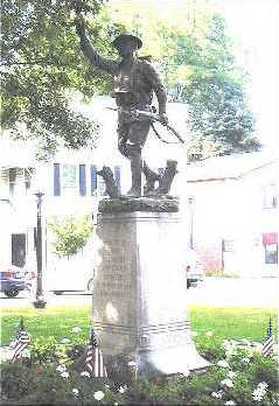 ,The engraving on the base reads: 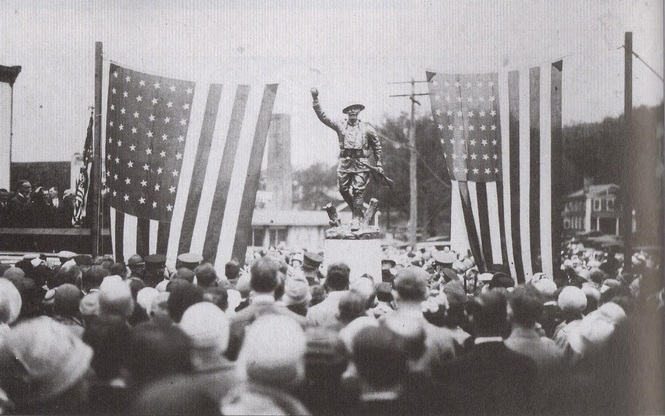 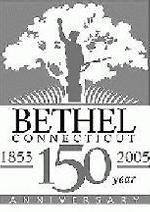 Sesquicentennial logo.
The monument was dedicated in P. T. Barnum Square May 30, 1928, after it had been chosen to replace a large decorative fountain that had been given to the town of Bethel by its most famous native, P. T. Barnum, in 1881, and which had been removed in disrepair in 1924. There is a circular brick walk around the monument and brick walkways, with rest benches, leading to it from various approaches.

The Doughboy has been vandalized and repaired many times. The repairs were made by local metalsmith Hugo Greco, who re-attached the left hand and rifle in 1987 and reconstructed the bayonet after studying an identical statue in North Canaan, Connecticut.  Additional vandalism repairs to the rifle were made by Greco's company in 2002.

According to a 2003 article in the Bethel Beacon, P. T. Barnum offered Bethel another fountain in 1928, but the town refused it. A town meeting was then held to discuss what would be selected to replace the fountain. At the meeting, Nicholas Stathes, a Bethel resident who was very active in civic matters, remembered he had a miniature Doughboy statue fashioned as a lamp, and thought the life-size version of the statue would be an appropriate monument. He asked for a recess in the meeting while he went home to get it to show the others. The "Spirit of The American Doughboy was selected.

In 2002, Mr. Stathes’ daughter, Annamarie Veith of Cocoa Beach, Florida was attending a Bethel reunion where Town Clerk Sheila Zelensky was a guest speaker. She learned at that time that Mrs. Zelensky was interested in collecting war memorabilia for Bethel's Veterans Hall. She also remembered the Doughboy lamp that sat on the Stathes’ piano when she was a girl – the one her father had shown at the 1928 Town meeting. To the amazement of Town Clerk Zelensky, Mrs. Veith donated it to the town. Mrs. Zelensky then sent it to Greco Industries of Bethel, Connecticut to repair the Doughboy’s rifle and arm.

The Doughboy lamp that was shown at the 1928 Town Meeting is now in a case at Veterans Hall in the Bethel Municipal Center.

Update May 16, 2015: Downtown Bethel is undergoing improvements, including a new brick patio at Doughboy Square.

Update June 21, 2016: The Bethel Board of Selectmen has authorized $10,300 to repair the Doughboy. It will be removed from its base on July 19 for restoration, and be returned in October. Polich Tallix, a fine arts foundry based in Rock Tavern, New York, will repair the metal and clean the statue. The company has now been acquired by UAP.

Update November 7, 2016: The refurbished statue was returned to its base in time for Veterans Day. 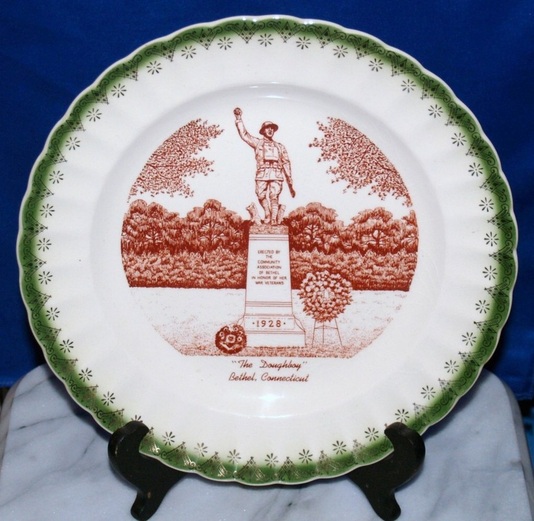