The E. M. Viquesney Doughboy Database
Above: Two views of the Doughboy at its old location. At left, as it was in March, 2000; at right, an old postcard view.

The inscription on a refurbished plaque reads:
ERECTED BY
HENRY COUNTY CHAPTER
AMERICAN WAR MOTHERS
IN HONOR OF
THE BOYS FROM THIS COUNTY
WHO SERVED DURING THE
WORLD WAR
1917        -        1918

The Doughboy was presented to the county by the Henry County Chapter of the American War Mothers, and dedicated August 25, 1929. The statue was unveiled by Captain R. H. Tyner, past Grand Commander of the Indiana G. A. R. Mrs. L. C. Boyd, president of the local chapter of War Mothers, state finance officer, and national auditor of the War Mothers, presided over the ceremonies.

The sculpture was not in good condition when the photograph above, left, was taken in March 2000. It had been painted, but the paint had cracked. The bayonet and rifle sling were missing. The left hand had broken loose from the cuff at and had been wired back on to keep it in place. Because of that, the rifle was swaying in the breeze. It is not known what has taken place since then, but at that time the photograph was taken, the sculpture was in major need of cleaning, and repair, and the application of a preservative that would not cause further chemical damage.

As of May, 2010 the sculpture was still in urgent need of restoration, with the left hand still nearly broken off.

Update July 19, 2017: The Doughboy is to be refurbished at a cost of $10,000 by a company in Detroit, Michigan, according to an article in the New Castle Courier-Times. The surrounding park area is to be upgraded as well.

Update August, 2017: The park board accepted a plan to move the statue to the W.G. Smith Building, which has generated stiff opposition among many New Castle residents.
​
Update September 21,2017: The Park Board has slated $8,000 for the Doughboy's restoration.

​Update November 9, 2017: The Doughboy restoration project is still looking for funds from the city of New Castle. The plan is to have the Doughboy restored and ready for public display by July 4, 2018. The official dedication of the monument is planned for Nov. 11, 2018, the 100th anniversary of the end of World War I.

Update November 14, 2017: The statue was taken down for much-needed repair and restoration.The park board accepted a plan in August to move the statue to the W.G. Smith Building. There is still a strong bloc of residents firmly opposed to the move.

Update November 8, 2018: Travis Weik, New Castle Courier-Times, informs us that the refurbished Doughboy has been mounted on a new pedestal in the middle of a newly constructed flag plaza outside the Memorial Park veterans museum. A rededication ceremony was held at 2 p.m. Sunday, November 11.

Below is a photo of the Doughboy rededication at its new location. Photo supplied by Travis Weik, courtesy of The Courier-Times, New Castle, Indiana. 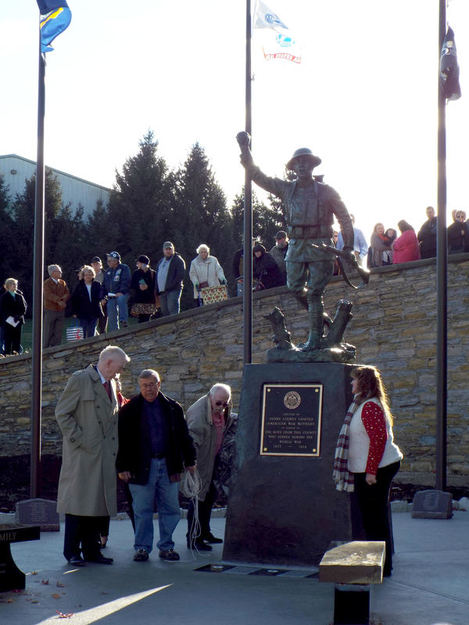 Photo: The Courier-Times, New Castle, IN.
[Below excerpted from a November 13 Courier-Times article by Travis Weik]

​The Memorial Park Board allowed local veteran Steve Peckinpaugh to have the Doughboy repaired and restored. Peckinpaugh helped create a new flag garden for the Doughboy.
​
Two dozen people and organizations made cash contributions to the Doughboy restoration and flag plaza. The seven flag poles were purchased by local families, individuals and the American Legion Post 216, Sons of the American Legion, Legion Auxiliary and Legion Riders. Seventeen companies and individuals also made in-kind donations to the Doughboy project.
​
Dozens of volunteers also designed and brought to life a museum at Memorial Park to make sure that all Henry County veterans can share their stories with the community.