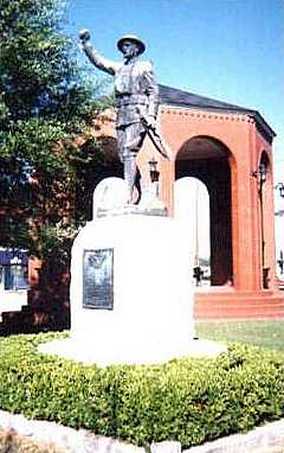 DEDICATED TO
THE MEMORY OF OUR COMRADES
WHO ENTERED THE SERVICE
OF THEIR COUNTRY
FROM WARE COUNTY
AND WHO GAVE THEIR LIVES
IN THE WORLD WAR
-
SPONSORED BY
WARE CO. POST NO. 10, AMERICAN LEGION
NOVEMBER 11, 1935
Various post officers and members who were active in the project to acquire the Doughboy are named on a plaque on the back of the base. 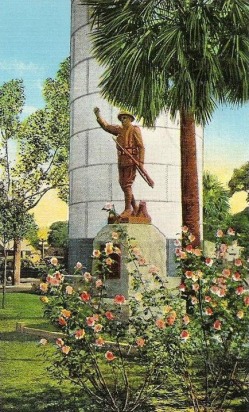 An old postcard view of the Waycross,
Georgia Doughboy.
Being a 1934 copyright version, the stumps are shorter and "SPIRIT OF THE AMERICAN DOUGHBOY" appears in large letters across the front of the base.

The bayonet went missing sometime after 1967. While the sculpture is in fairly good condition in comparison to many existing Doughboys, it could use cleaning and other treatment.


The red structure just beyond the Doughboy in the photo above is a bandstand that’s also in Doughboy Park. The park also has a memorial to those who served in other wars. A tall Civil War monument is a short distance to the South.

Georgia is the only state possessing all three full field gear versions of Viquesney's "Spirit of the American Doughboy":  This one at Waycross (zinc), the stone version at Madison, and four others of sheet bronze.