In fenced area at top of a mound in McCoy Memorial Park near the triangular ”V” formed by Old Madison Road and Madison Avenue (U. S. Highway 12).

The inscription on the plaque on the ground reads:

Dedicated along with the park on May 19, 1929. The left hand, bayonet and rifle were lost many years ago and the right arm was torn off in 1979. It was restored later that year in a little more forward position than it is on other Doughboys. After being lost again, the rifle was replaced by the pistol visible in the photograph to discourage people from swinging from it. The fence was also placed to discourage vandalism.

The park was founded in a joint effort of the American Legion and Spanish-American War Veterans, but they could not agree on whether the statue should be of a soldier of the World War or the Spanish-American War. As a result, school children raised a small part of the cost, and a local physician paid $2,000 for the remainder of the monument’s costs from his own funds.

An unsuccessful attempt was made in 1999 to have the Doughboy included in the National Register of Historic Places. 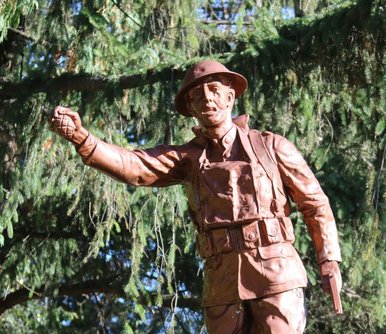 Photo: Craig DeVoy.
The Doughboy is not in good shape, as evidenced by this photo, taken October 27, 2018, by Craig DeVoy, from the Friends of McCoy Park, Fort Atkinson, Wisconsin Facebook group. It has suffered greatly over the years from vandalism and theft of parts.

Another World War monument at the other end of the park was dedicated in 1939 by the Jefferson County Chapter of the Service Star Legion. It's a plain marble block about four feet high and ten feet long.
An inscription on the front reads:
​
IN MEMORY OF THOSE WHO SERVED IN THE WORLD WAR

Update May 20, 2016: Progress is underway to restore the Doughboy.