A major design flaw was the separately installed left hand and rifle, which often fell out or got broken or lost.

Have a question about your miniature Viquesney Doughboy? See our FAQs page.
In April, 1921, Viquesney's "Spirit of the American Doughboy" won a national American Legon design competition held in Centralia, Washington, beating one hundred forty-seven other entries. When photographs of his winning statue hit the newspapers coast-to-coast, Viquesney suddenly found himself inundated with requests for a miniature desktop version. Thus, it was announced that "12-inch" pot-metal replicas of the life-size statue would be available the following June (they were really only 11.5", and actual distribution began on August 19, 1921). Some of them bear the copyright date of 1920, but others don't; it depends where the statuette was made. Production first began in a room in Walter Rylander's Ford dealership building in Americus, Georgia, but as demand grew, manufacturing facilities were added in New York City, Chicago, Cincinnati, and New Brunswick, New Jersey. There are minor differences in some of the pieces due to their varying origin: There can be differences in the "wood-grain" pattern on the back of the base, in the arrangement and type of barbed wire looped over the tree stumps, or in the design of the rifle sling. But even if it says "Americus" on the back, it doesn't necessarily mean it was made there; it just reflects the fact the company headquarters were situated there at the time. Later, after Viquesney had moved back to his hometown of Spencer, Indiana, in 1922, production also began at his new factory/office building in Spencer, Indiana staring around 1926. Thereafter, all miniature Doughboys bore the logo of "Spencer, Ind."

The first metal miniature Doughboy to be distributed was won as a raffle or door prize at a Kiwanis Club luncheon by Jack Holst, a lieutenant in the Great War. The first two to be actually shipped from Americus, Georgia were sent free of charge to President Warren G. Harding and General Jack Pershing, commander of the armed forces in the war. Sales immediately took off, and by 1927, 25,000 had found their way into homes and offices across the country.

Walter Rylander was Viquesney's friend and business partner in Americus, and in 1922, Viquesney sold all right and title to the Doughboy to Rylander, who then legally owned the property for the next four years. Almost immediately after the sale, Viquesney permanently moved back to his hometown of Spencer, Indiana, while Rylander continued to produce the miniature Doughboys in Americus and the other locations during those years.

Rylander had plans to shut down the other manufacturing facilities and concentrate and expand production in Americus, but before that could happen, Viquesney bought back his company from Rylander in 1926 and transferred all operations and remaining inventory from Americus to Spencer. It's interesting to note that the 11.5" Spencer models, although more recent, are much rarer than the Americus ones, perhaps due to fading memories of the Great War over the passage of time, the onset of the Great Depression, and metal rationing during WWII. All these conditions would have acted to impact sales.
Viquesney's imagination knew no limits when it came to marketing his creations; his miniature Doughboys soon began appearing in various sizes and styles, including table lamps, smaller sheet metal stamp-outs, bookends, candlesticks, and sub-miniature six-inch versions. There was even an incense burner version, but it seems not to have sold well. I've only seen an illustration of it.

Although deceptive wording in Viquesney's ads often led prospective buyers to believe otherwise, none of the statuettes was ever made of bronze, despite the claims of many sellers on eBay and other auction websites. It was only after the buyer had received the statuette that he or she would find a descriptive printed insert describing the piece as being made of soft "white metal [a lead alloy] which bruises easily".

Some 11.5" models were made of plaster and were identical to the metal ones except the rifle was held close-in vertically against the side of the figure. This model, too, was available as a lamp, but in a different style, with the bulb encased in a globe on the base.  Interestingly, this alternate pose was sometimes used by later artists for their full-size monuments which are often mistaken for Viquesney's work, but were made long after his death in 1946. See for example this 1983 statue at King, Wisconsin.

But by far, out of all versions the most popular was the original "standard" 11.5" cast lead alloy Doughboy statuette, originally priced at $5.00 or $6.00, depending upon the finish. But by 1936, due to the the Great Depression, the price had fallen to $3.00. Production of the 11.5" statuettes continued until at least the late 1930s, and a postcard ad from 1946 shows that the small 6" cast lead version was still being made at that time.
By the 1970s and '80s, the miniature Doughboys and other Viquesney miniature pieces were once thought to have almost completely vanished. But thanks to the research of T. Perry Wesley and the power of the World Wide Web starting in the 1990s, a "second wave" of these almost forgotten items began to emerge from attics, cellars, and garages across the nation. As a result, the market is now glutted with them; I've tracked hundreds of them on eBay alone. Many are found at estate sales. They aren't as valuable as people think they are, or want them to be.

Below are shown some of the various models and styles of the Viquesney miniature Doughboy. 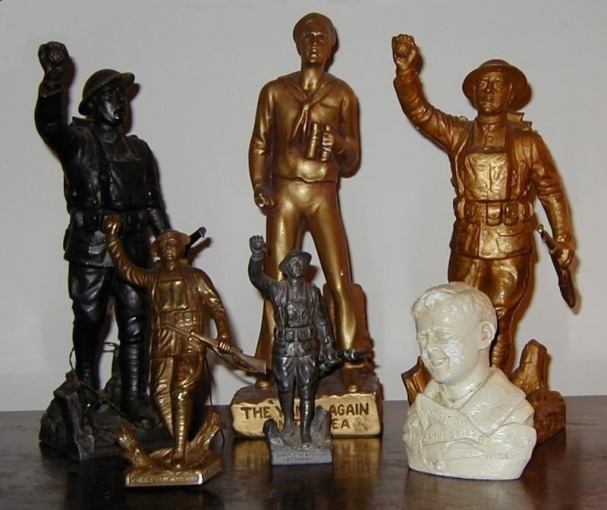