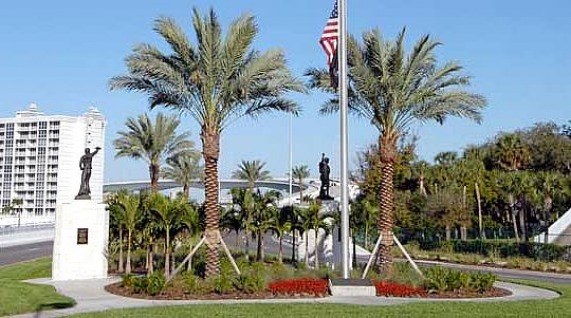 The Clearwater Sailor and Doughboy in their new setting near the new Memorial Causeway Bridge.
Photo: Thomas Walbot, Clearwater, Florida.

Smithsonian Art Inventory Control Numbers: 47260010, 47260136.
The photo above shows "The Spirit of the American Doughboy" and "The Spirit of the American Navy" at the new Court Street approach to the east end of the new Memorial Causeway Bridge. Before the new bridge was built, the statues stood in a park across from the municipal auditorium on Pierce Street near the east approach to the old bridge.

A new plaque on the pedestal of the Doughboy reads:

Originally dedicated on November 11, 1927
at the opening ceremony
of the Memorial Causeway Bridge.
Donated by the American Legion Post 7
in memory of 38 local service men
who died in World War I.

Rededicated November 10, 2006
following the completion of the
new Memorial Causeway Bridge in 2005,
the statue was restored and reinstalled.
Considered Viquesney's greatest work of art,
132 original "Doughboys" are still in existence.

A plaque with similar wording is mounted on the pedestal of the Sailor.
Although the plaque denotes 132 Doughboys, more have been found since.

At the original dedication in 1927, the sculptures once bore the emblem of the American Legion, but were actually acquired with funds raised by all local veteran posts of the day. More than 25,000 people attended the original dedication, which included a parade and fireworks.
For many years, the Doughboy’s bayonet was missing, and the rifle barrel had been replaced by a metal tube. However, the sculptures were removed in May 2002 and placed in storage while the new Memorial Causeway Bridge was being built. They were restored by sculptor Frank Colson and son of Sarasota, Florida and were re-installed at their new location at a public re-dedication ceremony on November 10, 2006. Mr. Colson had previously used the Clearwater Doughboy as a mold for the replica he fashioned that was installed at Sarasota on Memorial Day 1998. The Clearwater re-installation includes a new flagpole, historical marker, lighting, and landscaping, and the statues now stand upon two new pedestals about 10 feet tall.

This was the second time the statues had been taken down and put into storage. While work on the old 2nd bridge was in progress during the early 1960s, the statues were removed for 12 months until construction on the then-new east approach to the old bridge was completed in 1963. The black-and-white St. Petersburg Times photo below, records the return of the Doughboy at that time. 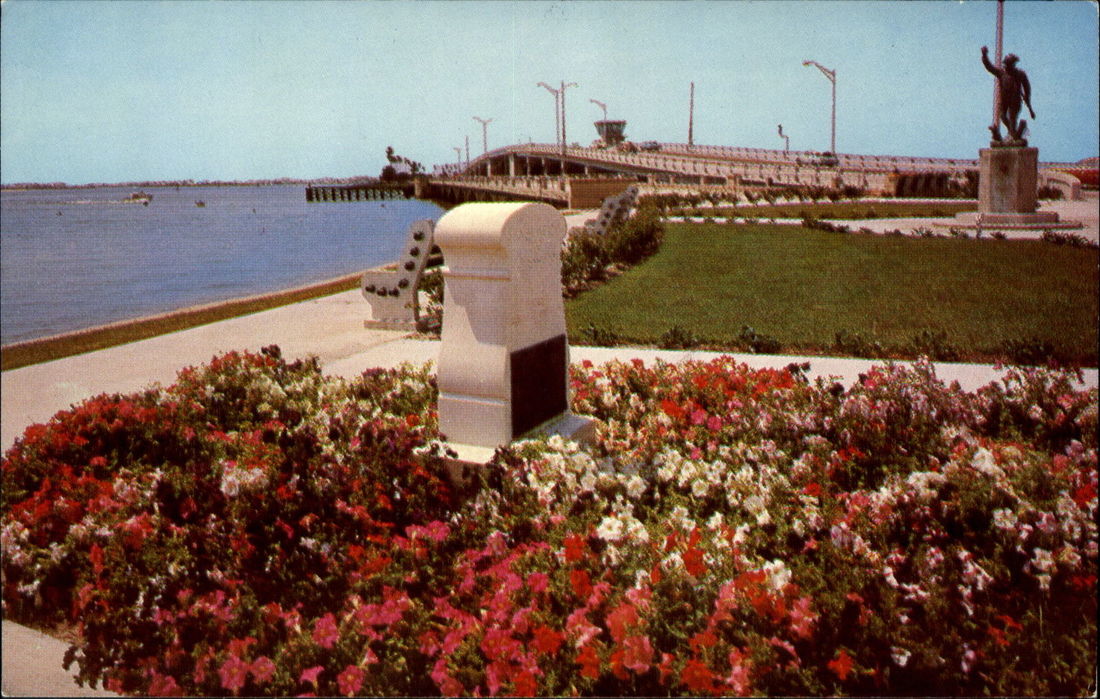 The Doughboy, probably in the late 1950s or early 1960s, before the latest bridge was built.
Five other metal "Spirit of the American Navy" sculptures accompany Viquesney Doughboys at Kingman, Arizona; Naperville, Illinois; Fort Wayne, Indiana; Granite and Hobart, Oklahoma; and a stone version at Crowell, Texas. A similar tribute to the Navy, titled "Sailor", occurs at Palatka, Florida, but although placed by Viquesney, it was not sculpted by him.