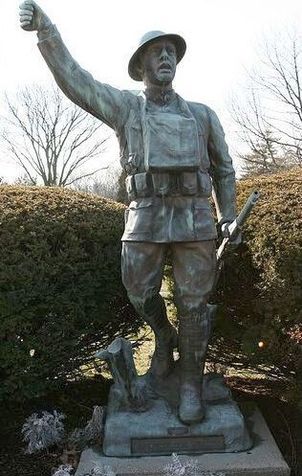 In the veterans section of Rest Haven Memorial Park, 10209 Plainfield Road, Cincinnati, Ohio, in the area known as Blue Ash.

No plaques or inscriptions other than

and below that, the title

SPIRIT OF OUR HEROES

The sculpture was first brought to our attention in February, 2008 by Doughboy Searcher and site contributor Harlan Ogle of Monticello, Kentucky, and was considered a candidate for being a "new" Viquesney Doughboy location for this website. However, subsequent examination of photos taken by others showed this statue has a different title, "Spirit of Our Heroes", and a different sculptor, George F. Yostel.

Except for the closed right hand which doesn't hold a grenade, and which looks like it might have been modified to hold a flagpole or similar object, judging by the position of the oddly bent wrist, the figure is identical to the 1920 version of Viquesney's "Spirit of the American Doughboy", with only minor differences in the positioning of the tree stumps on the base.

It looks as though the majority of the statue was made from the original 1920 molds, which were kept by Viquesney's original foundry, Friedley-Voshardt of Chicago after the artist switched to another company, Raphael Groppi Studio, in 1934.  And according to David Shanteau, Executive Director of Rest Haven, the statue was obtained after 1935, which fits nicely with that timeline.

So, is this an unauthorized copy? It's included on our website because it was made from Friedley-Voshardt's original molds, but technically, it's not Viquesney's "Spirit of the American Doughboy". How or why George F. Yostel, a well-known sculptor in his own right, took credit for this work is unknown.

Only one other known statue bears the same title, "Spirit of Our Heroes"; a badly restored sculpture in Vestal, New York, which we believe originally looked like this one, but which bears the name of a sculptor named only as "M. Laugle".  It also stands in a cemetery.