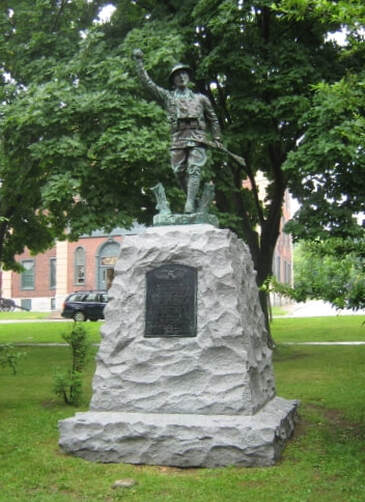 In Taylor Park, along Church Street, opposite the "T" intersection with Bishop Street.

The inscription on the plaque, below an eagle, reads:

IN HONOR OF
THOSE CITIZENS
OF ST. ALBANS
WHO AT THE CALL OF
THEIR COUNTRY
GAVE THEIR LIVES IN
THE WORLD WAR
1917-1918

THIS MEMORIAL IS
DEDICATED BY
A GRATEFUL COMMUNITY

The park area was given to the village by Holloway Tayor in 1799. It contains a bronze fountain given to the city in 1896, a granite memorial to veterans of the Civil War, and another granite memorial to those who gave their lives in World War I, World War II, Korea, Vietnam and the Lebanon bombing. It also contains a bronze cannon captured from British troops in the September 1814 battle of Platsburg during the War of 1812, and a bandstand. A U. S. Coast and Geodetic Survey marker is on the Doughboy’s north side, near the bottom of the granite base.

The Doughboy is in good condition except that the bayonet has been broken off and there are metallic stains.

The information below was provided by Donald J. Miner, St. Albans Historical Museum:

The estimated cost was $5,000. A drive to raise the funds began in July 1923 and a committe of 100 volunteers promised to call upon every one of the 2,200 households to request donations, hoping that the $5,000 could be raised in a single day, August 14. The St. Albans Messenger had almost daily articles for two weeks in advance and letteres were addressed to every household to alert the residents. The committee promised to place the names of the solicitors and every donor on a list to be deposited in the base of the monument. (Presumably, this was done.) The drive was a success and most of the required funds were raised on the appointed day.

The Doughboy monument, on a ten-foot pedestal of Barre granite, was dedicated at 3:00 p. m. on November 11, 1923, in a ceremony preceded by a parade organized by WWI veteran, Captain C. E. Pell, Grand Marshall. The parade was lead by the St. Albans Brigade band, which was followed by state and local officials, community organization members, survivors of past wars and contributing sponsors.

Major S. S. Watson, senior St. Albans WWI military officer, was in charge of the dedication ceremony. An invocation by the Legion Post Chaplain, Stanley C. Cummings, was followed by an unveiling, ie, removal of a U. S. flag draped over the statue, by J. G. Moore, a Civil War veteran and Commander of the A. R. Hurlbut Post, Grand Army of the Republic. The bronze plaque on the side of the monument was also uncovered.

Following the unveiling, the St. Albans Glee Club sang "The Soldiers Farewell." Charles E. Barber, Commander of the American Legion Department of Vermont then spoke. He was followed by Mayor F. A. Collins, who accepted the monument on behalf of the city. Congressman John Q Tilson of Massachusetts, a member of the U. S. House of Representatives Military Affairs Commitee and a veteran of the Spanish-American War on Mexican Border Campaign, delivered the main address of the day. The ceremony closed with a benediction by Chaplain Cummings followed by a rendition of the "Star Spangled Banner" by the St. Albans Brigade Band. 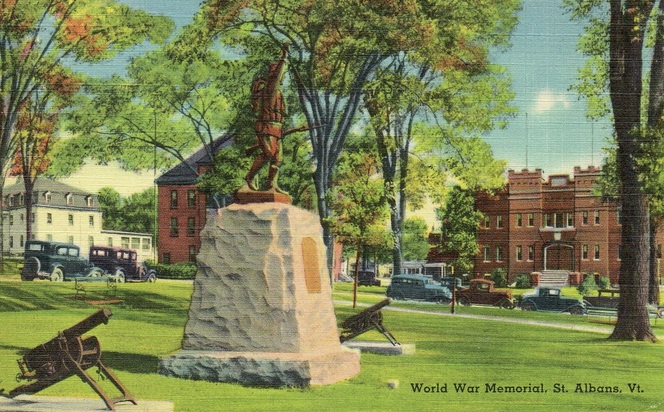 An old postcard view of the St. Albans Doughboy.