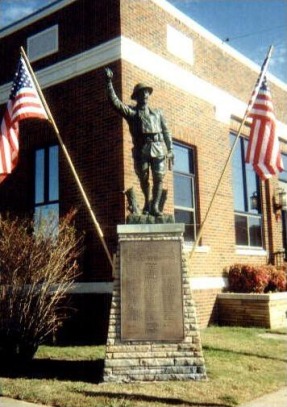 The Doughboy in front of the Henryetta Public Library.

At the Henryetta Public Library, at the intersection of Sixth and Main.

THE "AMERICAN DOUGHBOY" REPRESENTS THE AMERICAN SOLDIER
OF WWI. HE IS CHARGING OVER THE TOP TOWARD THE ENEMY LINE,
CARRYING FULL BATTLEFIELD EQUIPMENT. HE WAS ERECTED AS A
MEMORIAL
TO THE WAR VETERANS "BY THE PEOPLE." HE ARRIVED IN HENRYETTA
ON MONDAY, NOVEMBER 26, 1923.
THIS MEMORIAL PLATE TO THE MEMORY OF
ALL IN THIS AREA WHO PAID THE SUPREME SACRIFICE IN ALL WARS
WAS CAST "BY THE PEOPLE" IN THE YEAR OF 1991.
(followed by a list naming 16 who lost their lives from all causes in World War I, 64 in World War II, 3 in Korea and 2 in Vietnam.)

Except for the words "VETERANS OF FOREIGN WARS - POST 539" and the VFW logo originally painted on the base, there was never any other engraving or inscription until the plaque above was added in 1991. On November 3, 2016, a new set of plaques was installed, adding the names of almost 80 more service people from Henryetta who died in combat during the past century.

Below, the late Earl Goldsmith, whose hometown was Henryetta, Oklahoma, shared his thoughts and remembrances of "his" Doughboy. --  Ed.

“My” Doughboy – the one that caused my interest in gathering the information contained on this website – stood for over 44 years in the center of one of the two busiest intersections in my home town of Henryetta, Oklahoma, until it was moved in 1969 to the lawn of the public library.

Our Doughboy was acquired with funds raised by the American Legion, VFW, and local residents in 1923. The fundraising started with the July 3/4 Independence Day celebration. Local veterans raised a large part of the funds by operating concessions and a "hoose-gow" where local personalities were incarcerated for anything the veterans decided was an offense and released only after paying a fine into the Doughboy fund. That fall, the veterans presented a standing-room-only talent show at the Morgan Theater with participation by several personalities who were still very active on the local scene when I was a teenager. They also had a drawing at the Owl Drug Store with two miniature versions of the Doughboy, including one fashioned as a lamp, as prizes. These events succeeded in raising the funds needed to purchase our Doughboy and he arrived in Henryetta on November 26, 1923, but wasn't dedicated until July 4, 1925.  Many of those involved in the fundraising activities were adults I knew later as I was growing up in Henryetta in the 1930s and 1940s.

Unfortunately little attention had been given to acquiring a pedestal until a week or so before our Doughboy arrived. Then it was suddenly realized that what people had in mind would cost more than they were prepared to pay. It took 19 months to adjust their desires and build an affordable pedestal. During the interim, our Doughboy was displayed in store windows, the Morgan Theater lobby, Westlawn Cemetery, and other places. The townspeople built a temporary light pedestal upon which he could be transported for display on occasions such as Memorial Day, Armistice Day, and other holidays. 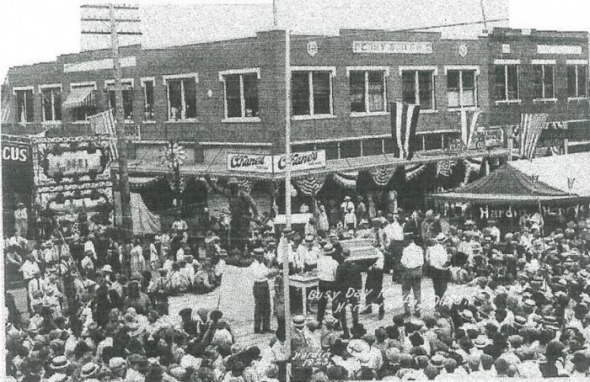 The 1923 picture above shows residents celebrating around their new Doughboy, here temporarily displayed at 5th and Main on its movable pedestal.
Finally, a permanent pedestal was completed in the center of 4th and Main, one of the two busiest downtown intersections, and the Doughboy was dedicated there on July 4, 1925. Master of Ceremonies was VFW Commander Harry Reingold, father of one of my later schoolmates. Speeches were made by the Honorable Barclay Morgan and George Riley Hall. The unveiling was by Mrs. George Cullen, the mother of Norman Cullen, one of the last Doughboys killed – on the morning of November 11, 1918, shortly before the Armistice took effect. Local veterans held a mock World War battle on the hill north of town after the dedication. 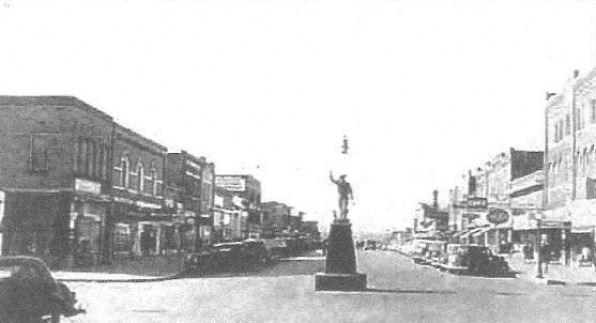 Above: My Doughboy that stood facing East at Henryetta, Oklahoma’s Fourth and Main Street. He stood there from 1925 until he was moved two blocks West to his current Sixth and Main location on the lawn of the Henryetta Public library in 1969. The picture was taken sometime in the range of 1938 through to 1945. It shows our Doughboy as I remember him with a traffic light suspended directly above by wires stretched from the tops of buildings on the corner. My father’s offices were at the four far windows on the second floor of the three-story building at the right edge of the picture.

As soon as he was placed in the center of a street used by two U. S. highways, federal officials objected and began proposing that he be moved. Every time they did, residents mounted strong objections. Then, at a September 1969 night meeting, the City Council voted to move him and he was removed from the intersection by next morning, before most residents knew it was happening. In fairness, the City Council wasn’t as devious as that might seem, though many residents thought it was. The City Manager had told a civic club of the intended move at a noon luncheon that day, and his announcement had been reported in the evening edition of the Henryetta Daily Free-Lance before the council’s vote. During the early morning move, there was even a bugler on hand who played Taps as the statue was taken down.

He was reinstalled two blocks to the west on the Sixth and Main library lawn as soon as a pedestal was completed there. (Building the pedestal before he was removed from Fourth and Main would have generated questions and protests that might have delayed the move.) 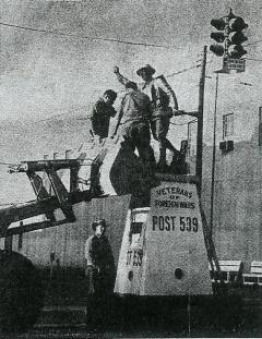 Workmen begin the 1969 move.
Photo supplied by Mike Doak and Ruby Wesson.
During my youth, the building at Sixth and Main, on whose lawn the Doughboy was moved in 1969, housed the U. S. Post Office. The public library preceded the Doughboy to that location by just a few months after the post office moved to another location.


My friends and I growing up in the 1930s and 1940s didn’t wonder if our Doughboy had a name other than "Doughboy," how he was acquired and came to be there, the identity of his sculptor, whether there were others like him, or anything else about him.  He was just there. We were proud of him because he gave our town an identity it didn’t otherwise have and made it easier to identify to someone who had trouble remembering it. As our most recognizable landmark, he was a convenient place to meet friends and hold pep rallies and other gatherings or celebrations.

While we were proud of our Doughboy, his presence had drawbacks. A left turn around him was the most feared part of our driving tests. Additionally, vehicles occasionally hit his base and were always the losers in those encounters. His pedestal was firmly planted and each corner had an angle iron that extended about two feet above the street. When contested, he stood firm.

His biggest drawback was that he was just plain in the way. Parade vehicles, floats and bands had to decide how to get past him (bands usually split). Two U. S. highways followed a joint route past him, but to avoid him, inter-city trucks and busses, even World War II Army convoys, went through town on streets a block north or south of him.

Regardless of the traffic and parade problems he presented, we were proud of our Doughboy. He gave the town a landmark reference that it didn’t otherwise have and made it easy to describe to those from other towns. He was also a convenient location to meet friends or hold rallies. I estimate that I went by him 15,000 to 20,000 times while growing up and don’t recall his ever suffering from acts of vandalism.

I left Henryetta for college after graduating from high school in 1948 and, except for one brief period, never lived there again. But my memories of the town are strong and I return from time-to-time for reunions. The locals are used to the fact that our Doughboy is now on the library lawn, but I, and all my friends who left long ago, still miss his being in the Fourth and Main intersection. I also wonder what’s used as today’s big driving test challenge.

I first learned ours was not the only “Spirit of The American Doughboy” when I happened to encounter a miniature replica in about 1965. When I registered surprise at seeing it, an elderly (or so I thought then) individual told me several had been placed around the country back in the twenties. His comment left an impression in my mind about something I wanted to pursue when time permitted. My assumption back then was that “several” might mean five or six, and probably not more than ten. Over time, I learned of just a few, but became more interested in the 1990s and searched some library files a little further. That just led me on.
Above: Oklahoma Citizen pictures of the Henryetta Doughboy being readied for an October/November 1999 restoration. The photo on the left shows the Doughboy being dismounted by a city employee and a representative of Bronze Horse Fine Arts Casting (both unnamed). On the right it is pictured with an unnamed representative of Bronze Horse and Lois Rodriquez, owner/publisher/editor of the Citizen, who, with others, was very interested in the restoration project, as they sit in the back of a pickup truck used to transport it to Pawhuska for restoration.  It must have been an interesting sight on the highway for the over 100 miles from Henryetta to Pawhuska.

After the 1999 repairs, a cleaning and preservative application were performed by John Free of Bronze Horse, the Doughboy is now in better condition than the majority of his companions. However at some time since 2004 the rifle sling has gone missing.

Update November 3, 2016: After a half-year of fund-raising and preparation, new plaques were placed at the Henryetta Doughboy statue. The new plaques were made possible through donations form a number of individuals and businesses around town with the project headed by Bill and Verna Goodner. They researched numerous obituaries to find nearly 80 additional names of service members who gave their lives in combat over the past century. With the addition of these extra names, the total now stands at 176. The plaques were officially dedicated on Veterans Day, Nov. 11, 2016, at 2 p.m. in front of the Doughboy. The old plaque is to be placed at the Henreyetta library in the military section. As part of the Doughboy enhancement, new lights have been installed at the base of the pedestal to illuminate the statue at night.