On north side of 21st Street North, about 200 feet past intersection with Cemetery Avenue in the Veterans Section of New Ulm City Cemetery, about two miles West of New Ulm.

The plaque on the front of the base reads:

IN SACRED MEMORY OF THE
SOLDIERS, SAILORS AND MARINES
WHO SERVED THEIR COUNTRY
IN TIME OF WAR
ERECTED IN 1941
BY VETERANS OF FOREIGN WARS, U. S. A.
A new plaque added nearby reads:

A plaque bearing the poem "In Flanders Fields" stands in front of the statue in a circular walkway.

Another nearby marker contains a map and lists names and grave locations of those buried in the Veterans Section of the cemetery.

The Doughboy in the photos is a bronze replacement of the original zinc New Ulm Doughboy that was destroyed by vandals on February 14, 1995. The replacement was made by Innocast Execuline of Howard Lake, MN, using molds made from impressions of pieces of the original Doughboy, and was funded by citizens, with matching donations by three local banks: Citizens Bank, Farmers and Merchants Bank and State Bank and Trust Co. The most noticeable differences between this replacement and the original Doughboy is that the replacement has more of a bend in the left elbow and a decidedly greater upward tilt to the rifle. The base is the original. The original statue rifle is on display at American Legion Post 132 in downtown New Ulm. The original grenade-holding right hand is on display at the Brown County Historical Society and Museum downtown.

New Ulm has an extensive German heritage, with many German traditions and celebrations. Its residents lost relatives serving on both sides during the war.  The Doughboy's setting in the Veterans Section with the Avenue of the Flags (where rows of flags are displayed on holidays) is among the most impressive of any. 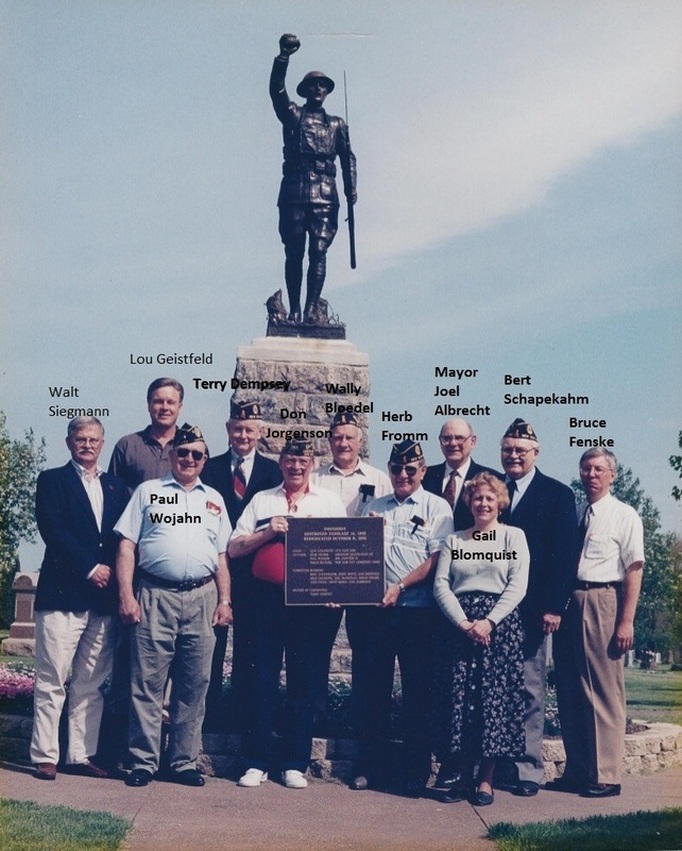