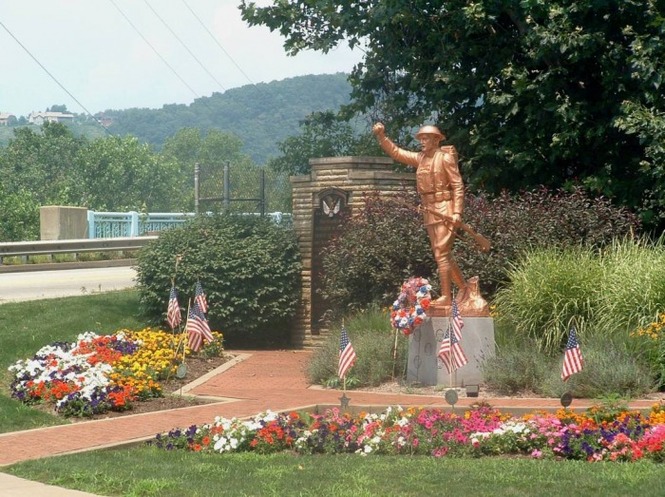 VERONA, PENNSYLVANIA
(This was the last Viquesney Doughboy delivered and erected.)

At the corner of Allegheny River Boulevard and Lamagna Drive, in an eastern suburb of Pittsburgh.

The inscription on the base reads:

FOR ALL WHO SERVED

There are two impressive plaques mounted on either side of the Doughboy.

(Eagle, crossed flags and shield emblem)
THIS MEMORIAL IS
DEDICATED IN SINCERE
TRIBUTE TO THE LIVING
AND DEAD OF VERONA, PA.,
WHOSE VALIANT EFFORTS
AND UNSELFISH SACRIFICES
HAVE MADE AMERICA GREAT.
GOD GRANT THAT THE
LIBERTY OF HUMANITY, WON
ONLY BY BRAVE SOULS AND
VIGILANTLY GUARDED, SHALL
LIVE ON WITH INCREASED
STRENGTH AND SPIRIT,
PERPETUATED FOR
ALL AGES TO COME.

A TRIBUTE FROM THE PEOPLE OF VERONA
TO THE BOYS AND GIRLS WHO ANSWERED THE
THE COUNTRY'S CALL IN THE WORLD WAR, 1917-1919.
(followed by a list of many names in three columns.)

And at the bottom:

"THAT THIS NATION, UNDER GOD, SHALL HAVE A NEW BIRTH OF FREEDOM,
AND THAT GOVERNMENT OF THE PEOPLE, BY THE PEOPLE, FOR THE
PEOPLE, SHALL NOT PERISH FROM THE EARTH."   A. LINCOLN
The bricks contain names of servicemen. The area is divided into an "old" section (where the Doughboy is) and "new" section across the street which includes a cannon and granite plaque dedicated to all branches of the Military.  It reads:
TO THE MEN AND WOMEN OF VERONA
WHO HELPED PRESERVE THE FREEDOMS
OF HUMANITY FOR ALL AGES TO COME
(followed by the insignias of all military branches)

Subtantial portions of the information that follows is from Pittsburgh Post-Gazette articles by Teresa Kolenchak and from “A VERONA ALBUM, 1871-1971, One Hundred Years of Memories” by Helen Barr, Elena Zaccaria and Georgie Reed, the Verona Centennial Book Committee.

After Charles Carnahan, Adjutant of Kletzley-Egli Post 441, Veterans of Foreign Wars, received promotional material about a “doughboy” statue, the post, on February 12, 1942, authorized a committee to acquire the statue, with Post Commander Hugh Abercrombie personally providing the $25 down payment. Upon receipt of the order, the statue was placed by its founder in a warehouse near Chicago to be held until the rest of the cost was received. Most of the rest of the cost was raised by using a full-sized picture of the Doughboy that had been ruled off into nearly 7,000 postage stamp sized squares that had been provided to the post upon receipt of the down payment. People could buy stamps for 25 cents each, write their names on them and paste them in an empty square – the picture was on display to attract public attention at the Woodings Hardware Store and the John Cribbs Real Estate office. It’s believed that a drawing was held with a miniature version of the Doughboy as the prize to the person whose name was in the winning square. By the time all the funds (over $2,500) were raised, the warehouse was destroyed by a fire, but the badly damaged Doughboy survived. It was cleaned and repaired by the Doughboy Statue Company, arrived in Verona June 10, 1943 and was placed on view in the VFW Post Home, where it remained for nearly ten years.

In the 1930s, Dave Kelly, Merrill Cribs and George Peters asked the Pennsylvania Railroad to donate a small point of land at the end of the new “viaduct” for a site for a World War One Honor Roll, and, with the railroad’s approval, succeeded in having the Works Progress Administration build a wall at the rear of the plot to mount the Honor Roll. About that time, the railroad gave the triangle plot formed by Allegheny River Boulevard and Seldon Avenue to the Verona Women’s Club, and the club maintained it for many years as a beautiful flower garden. 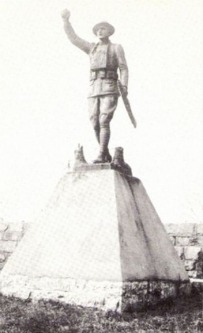 Photo provided by
Mickey Cendrowski.
In 1951, Post Commander John Tumulty had discussions with the Women’s Club that resulted in the triangle being deeded to the VFW to incorporate into its memorial. In 1952, Post Commander Harry Schwalm decided to put the Doughboy on a pedestal (left) where everyone could see it, and a base in the memorial area was completed in May.

Finally, on Saturday, September 13, 1952, Verona's Doughboy was formally dedicated.  Chester Bodenheimer was Master of Ceremonies and Oakmont State Senator John Walker was the speaker. William Tepsie, State Commander of the VFW and John Lauers, President of the Volunteer Firemen of Western Pannsylvania, took part in the ceremony.


In 1960, Post Commander Jack Peffer headed a committee to rebuild the memorial. In that process, a new tablet was purchased to commemorate all men and women who have served in the Armed Forces of the United States.

On Saturday, November 14, 1964, a new renovated memorial was presented to Post Commander Leo P. Eckstein, with Mayor Harold Miller and county and district officials of the VFW participating. The dedication address was by Lt. Governor John Walker. During the ceremony, the memorial was scattered with soil from the grave of Past Post commander Jack Peffer in Arlington Cemetery by Post Commander Leslie Stuart to symbolize the memorial’s dedication to the memory of all sons and daughters of Verona who have served our nation.

Years later, vandals sawed a leg from the statue and it was replaced.

Photo: Pittsburgh Post-Gazette
reporter Teresita Kolenchack.
Right:  The entire sculpture was pushed off the pedestal New Year’s Day 1997, breaking off the right arm. During the 1998 refurbishment, questions arose as to the ownership of the property, whether the railroad had ever actually owned it in order to give it to the Women’s Club and the Post. While it is unclear just how all this was resolved, the end result appears to be that the statue and the land is now owned by the Borough of Verona. Within months after it was reinstalled in 1999, it began to crack, pieces began to fall off and leakage and staining began to occur. It was locally believed that improperly mixed cement was placed inside, and that the cement had air pockets in which condensation expanded and caused cracks that resulted in this damage. Verona officials believed that if it were left outdoors, the sculpture would deteriorate, so in about 2000 it was supposedly donated to the Soldiers and Sailors museum, which had expressed an interest in restoring it. Instead, the Doughboy sat for almost three years at Donatelli Monuments before being reclaimed by the borough. It was then stored in the public works garage for another year and then moved to a location inside the Verona Borough Hall.

While visiting Verona, Tom Podnar, a restorer with McKay Lodge, noticed the statue was missing from its outdoor post, and contacted the borough about letting him fix it. Mr. Podnar found the statue was broken in pieces and filled with plaster. It had to be completely disassembled, and each piece individually cleaned. After this treatment, all the pieces had to be soldered back together. The sculpture was returned to its original location
in May, 2005, according to Verona Borough Councilman David Ricupero.
Sadly, eleven months after the photos by R. J. Buchanan were taken, the "curse of the Verona Doughboy" struck yet again, when on June 9, 2007 a police report was received stating the statue had toppled. Examination of the site apparently ruled out vandalism; structural weakness at the ankles was cited as the cause. The statue fell to the left of its pedestal, breaking its raised arm and hand. All the pieces were removed to the borough maintenance garage. Repairs are currently in progress, according to this Rootsweb site. Tom Podnar, the last person to restore the sculpture, strongly disagreed with the police assessment, suggesting the statue must have been swung on by someone, weakening it. The borough of Verona sued Podnar to recover the cost of repairs, but the district court found in his favor.

Photo: R. J. Buchanan, Penn Hills, Pennsylvania.
Above:  Verona's Doughboy as it stood in July 2006 between two large plaques in the beautiful "old" section of the memorial area. The stone structures holding the plaques are actually the ends of a low wall that curves behind the statue. The "new" section across the street includes an additional granite plaque and a cannon. 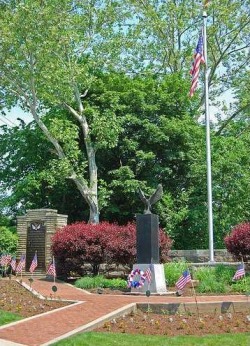 Photo: R.J. Buchanan,
Penn Hills, Pennsylvania.
A report from photographer R. J. Buchanan in February 2009 stated that there was now a black granite monument atop the base where the Doughboy once stood, and in May. 2009 he submitted the photo at left to Flickr.com. It is shown here with his permission.

Update August, 2014: Tour of Honor rider Joe Yarzebinski sent in a photo of the statue being repaired in the Verona municipal garage (below), and a December
newspaper article states the statue will return by June 2015 at the earliest. The eagle from the temporary monument (left) will then be placed inside the borough hall. 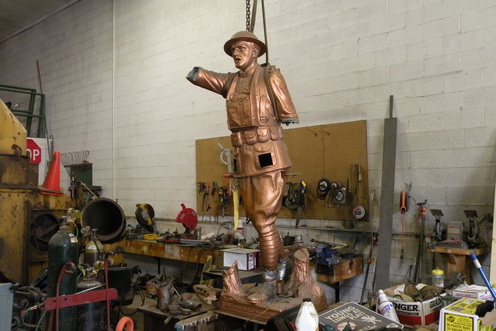 Photo: Joe Yarzebinski, Allison Park, Pennsylvania.
​Update: June 27, 2017: As of the end of May, the statue is back on its base. It looks as though a rededication ceremony is being planned; my guess is this November, on or around Veteran's Day. The statue was restored by Russell Frazier and Alan Guggie. 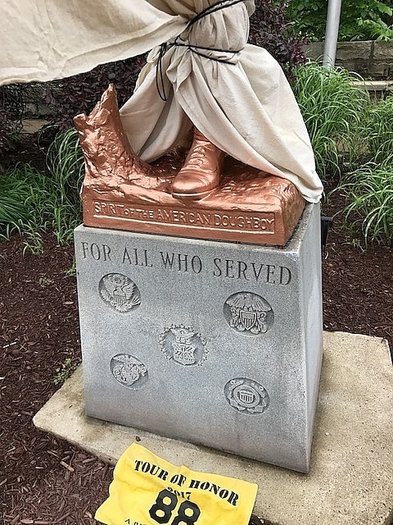 Photo: Tour of Honor rider Brian Edwards, Chesterfield, MI.
Update September 10, 2017: Well, we were wrong; the statue was unveiled in time for the 9/11 anniversary. Thanks to Tour of Honor rider Joe Yarzebinski for the photo, submitted by TOH official Eric Marshall. 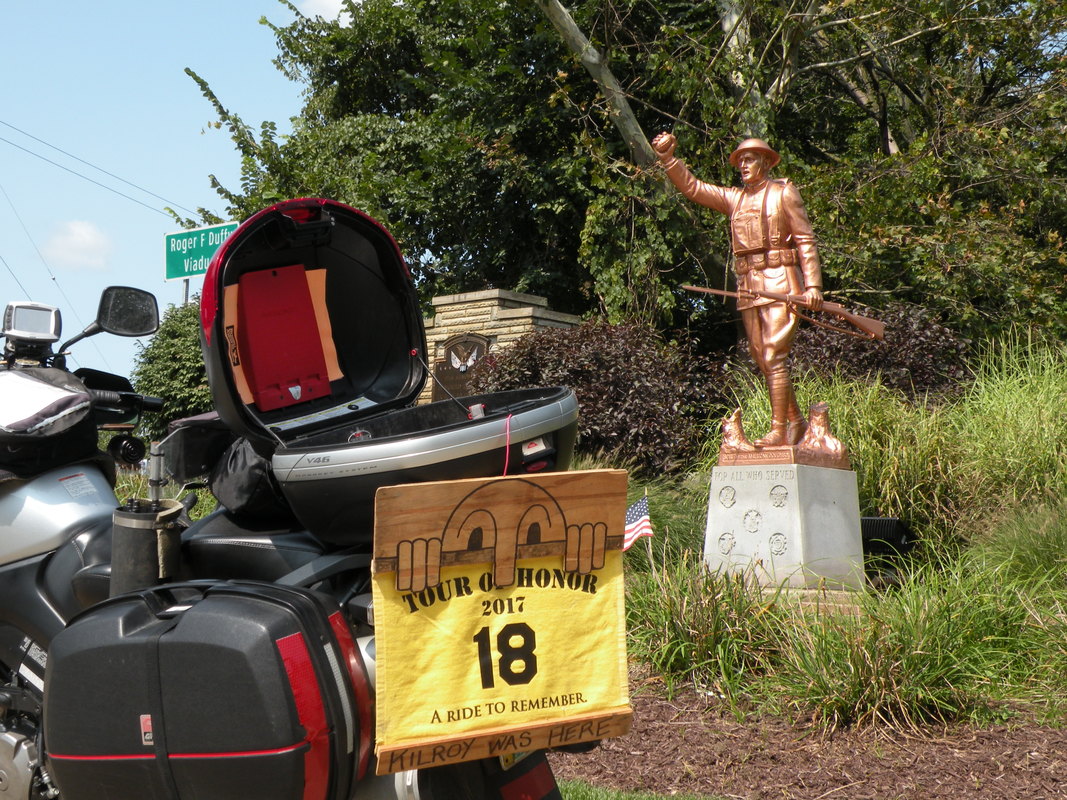