At Monroe County Courthouse, northeast corner of Walnut and 6th.

The inscription on the front of the pedestal reads:

The inscription on the back of the pedestal reads:

Dedicated May 30, 1944, this is the first "Spirit of the Fighting Yank" placed, and the only one made of stone. At the dedication, speeches were given by Lieutenant Gerry Kister, Colonel Shoemaker and Judge Regester. The statue was actually carved by Harry D. Donato, who used Viquesney's final design sketch as a guide. The piece is fully credited to Viquesney as the original sculptor.  The daughter of Indiana sculptor Ivan Adams claims her father "worked on" this statue. If true, in what capacity Adams contributed is not known; his name doesn't appear anywhere on it.

This is possibly the last Viquesney public monument dedicated during the sculptor's lifetime. Later copies of this statue, dedicated in 1946 and onward, were handled by Viquesney's successor, Frederic L. Hollis of Gosport, Indiana. 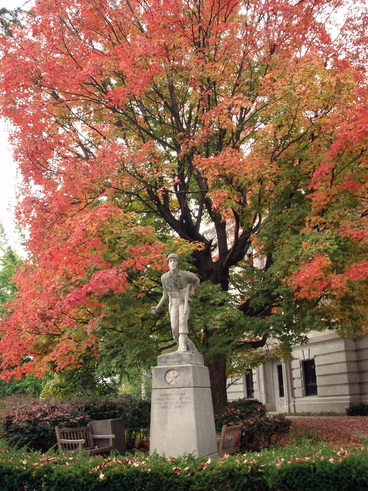