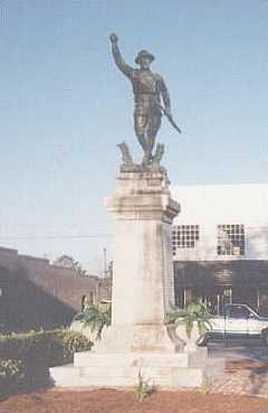 NASHVILLE, GEORGIA
(the first "SPIRIT OF THE AMERICAN Doughboy" MANUFACTURed)

On the Northwest corner of Berrien County Courthouse Square – near the intersection of East Marion Avenue and North Davis Street.

The engraving on the front of the tall granite base reads:

An engraving on the Doughboy’s left side reads:

HONOR ROLL
OTRANTO VICTIMS
(followed by a list of 25 county soldiers lost when the troop ship Otranto sank off the coast of Scotland following an October 6, 1918 collision with another ship, the Kashmir, during a storm.)
An engraving on the Doughboy’s right side reads:

This is the first Viquesney Doughboy manufactured. It was ordered in August of 1920 (before it was even finished) and erected in the middle of Marion Avenue just behind its current location in late July or August 1921, but was left veiled until late 1923 when payment for the sculpture and impressive base was finally received. This delay caused many other Viquesney Doughboys to be dedicated ahead of it. The first Viquesney Doughboy to be dedicated was at Greenville, South Carolina, on the campus of Furman University on June 7, 1920. Nashville's statue was moved to its current location starting on February 28, 1939. The move took three days because of rain delays. Before its original placement in Nashville, the statue was displayed in the lobbies of the Rylander and Windsor Hotels in Americus, Georgia, and toured on a national exhibition. 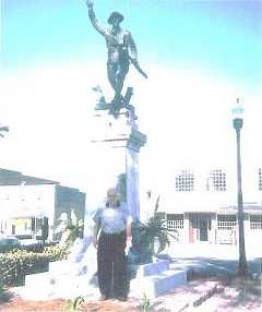 Earl Goldsmith at Nashville, GA.
That’s me (Earl Goldsmith) standing in front of the original Viquesney "Spirit of The American Doughboy" early on the morning of April 13, 1999. After photographing the Waycross, Georgia Doughboy the day before and spending the night in Waycross, I had driven to Nashville and arrived there about 7 a. m. As I was surveying the monument and taking photos, a man came down the street and entered the Courthouse. A few minutes later he exited the courthouse and walked across the street to a restaurant. After making notes at the Doughboy, I walked over to the restaurant to see if anyone there could tell me any local history relative to the monument. The man was having coffee with about six others early coffee drinkers. What luck! He was former county Probate Judge, John P. Webb, and he had a lot of information. The name of his uncle, Shelly L. Webb, is included among those lost in the sinking of the Otranto.
After talking a while, we went to the Courthouse offices of the then current Probate Judge, Susan W. Griner (Mr. Webb’s daughter). She showed me through some of her files about the Doughboy and suggested I go to Nashville’s Perry County Library for more information, which I did. But first, she insisted that we go out to the monument so she could take my picture standing in front of it (above, left).

Interestingly, the names of those lost in the sinking of the Otranto also includes that of Bennie E. Griner. I don’t know if he was a relative of Susan Griner’s husband or not.

On October 6, 2018, the 100th anniversary of the Otranto disaster, an elaborate memorial ceremony was held.

Update May 11, 2021: The Georgia Historical Society has announced the unveiling of a new historical marker at the statue, commemorating the 1918 Otranto troop ship disaster.
The new marker reads:

“Spirit of the American Doughboy”

Following the United States’ entry into World War I (1917-1918), more than 100,000 Georgians
were involved in the war effort, with the state suffering over 1,000 casualties. The rural community
of Berrien County experienced an extraordinarily high rate of loss, particularly in the 1918 sinking
of the troopship HMS Otranto, the greatest maritime disaster of the war. Answering President
Woodrow Wilson’s call to honor those who died in the war, Berrien County commissioned the first
Doughboy statue sculpted by Americus, Georgia, resident Ernest Moore Viquesney. Completed in
1921, the statue was unveiled in 1923 when the community raised the funds to acquire and install
it. Known as “The Spirit of the American Doughboy,” the design was replicated all over the country
to memorialize soldiers lost during World War I.

Erected by the Georgia Historical Society and the Berrien Historical Foundation