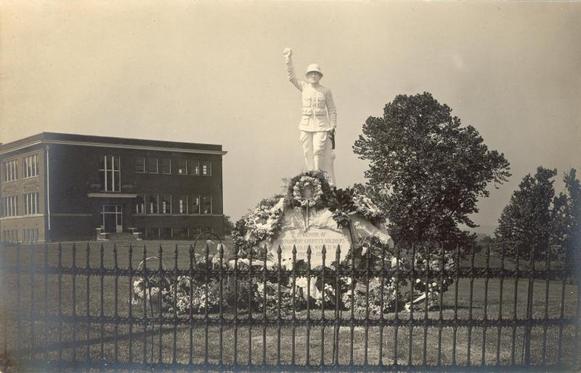 The Clarksville Doughboy at its original location in front of the old high school.

This is one of five known stone designs similar to Viquesney's "Spirit of the American Doughboy" but which lacks the full battle gear. They are all thought to have been made by McNeel Marble Company of Marietta, Georgia. This one is of special interest because it was misrepresented as a Viquesney Doughboy in a sales pitch to the citizens of Clarksville.

A CASE OF BAIT-AND-SWITCH? 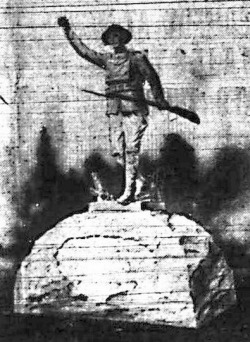 Photo supplied by Alane S. Megna
Clarksville Leaf-Chronicle.
While doing research for the restoration of the Doughboy, Alane S. Megna of the Clarksville Leaf-Chronicle uncovered the photo at left, which was published in the paper on October 30, 1928, purportedly showing Clarksville's citizens what their new memorial was going to look like.  But it's a photo of a Viquesney metal Doughboy, complete with two tree stumps, gas mask pouch, and field pack, shown mounted on the same base that eventually came with the marble statue Clarksville got.

Moreover, further research by Earl Goldsmith revealed that the known Viquesney stone Doughboy at
Madison, Georgia and the Clarksville, Tennessee Doughboy were both made and sold by McNeel Marble Company of Marietta, Georgia. These facts could be "smoking guns" that could possibly link Viquesney to Clarksville's Doughboy.

In whatever case, it appears McNeel sold Clarksville a "bill of goods" using a classic bait-and-switch.
The statue was originally dedicated on June 9, 1929. For years it was neglected until finally restored by sculptor Scott Wise, who carved and replaced an entire new head, and cast a bronze replacement for the missing rifle.  The restored sculpture was rededicated at its new location in front of the transit station on Legion Street at a ceremony which took place on April 15, 2010, with children of WWI hero Sergeant Alvin York present.

Originally advertised and sold as "Italian marble" (in 1928 the citizens of Clarksville were told they had to wait six months for the carved statue to "arrive from Italy"), an examination of a microcore sample by the local university's geology department during the 2010 restoration proved the statue to be composed of partly metamorphosed limestone of a type locally known as Alabama or Georgia "marble". Over the years, the original news articles mentioning marble seem to have been forgotten, for it was thought by some observers as late as 2009 that the statue was composed of "cast stone".

Unlike a true Viquesney "Spirit of the American Doughboy", the rifle on this statue bears no original or current bayonet.  The rifle was restored with a bronze casting of a 1917 Enfield, the same type of rifle that famous Sergeant York was issued during the World War. True Viquesney doughboys bear, or originally bore, a bayonetted Springfield 1903 A3.
On the night of November 25, 2010, the left hand was broken off and the rifle taken from the newly restored statue. It was turned in to police two days later by the perpetrator, who claimed it was an accident. No charges were filed, and the statue was repaired in March 2012, by sculptor Scott Wise.

On or about May 10, 2013, the left hand was again broken off and the rifle stolen. As of this writing (February 28, 2014) neither has been recovered. Plans are underway to once again repair the statue, and a move to a new location is being considered by the Clarksville City Council.

January, 2016: The repaired statue is now in front of the Clarksville Veterans Home.