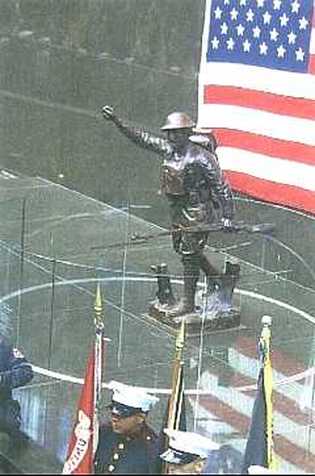 Originally dedicated in Garfield Park in March 1926 near Hamlin and Garfield
with a primary engraving that read:

Photo: C S & O Studio.
This Doughboy was severely damaged (see left) in Garfield Park in the 1960s and placed in storage for preservation purposes by the Chicago Park District. After many years there, it was restored by conservator Andrzej Dajnowski of Conservation of Sculpture & Objects Studio, Inc., of Forest Park, IL, and with the support of Alderman James Balcer and WWII veteran Fred Randazzo, placed inside the grounds of Soldier Field in conjunction with the major rebuilding of the new stadium. It was rededicated there in a very impressive ceremony September 27, 2003 and now stands raised on a 15 x 25-foot marble slab inside a protective glass circle with a new etched inscription.

INSTALLED BY 132ND INFANTRY (2ND ILLINOIS)
GARFIELD PARK, 1926
AS A TRIBUTE TO
WORLD WAR I SOLDIERS 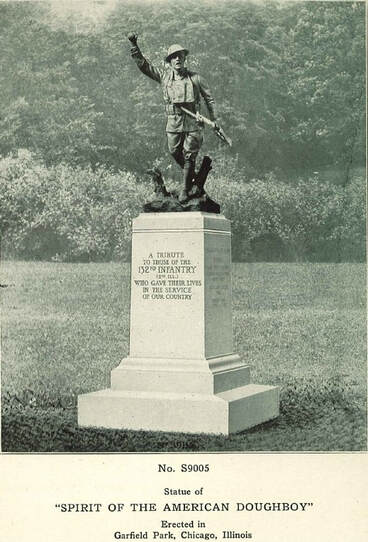 The illustration above is from Friedley-Voshardt Company catalog number 50, published in 1926. It proves that this Doughboy is one of three definitely known to have been made by that company. Smithsonian Institution records show the Viquesney Doughboy at Mt. Olivet Cemetery, Fort Worth, Texas, was also produced by Friedley-Voshardt, and a photo of the logo taken by one of our "Doughboy Searchers", Bill Plack, of Herminie, Pennsylvania, proves that the Doughboy in Warren, Ohio, was also manufactured by the same company. It's since been proven from old Friedley-Voshardt ads that the company was indeed the manufacturer of all the sheet bronze copies of this statue. 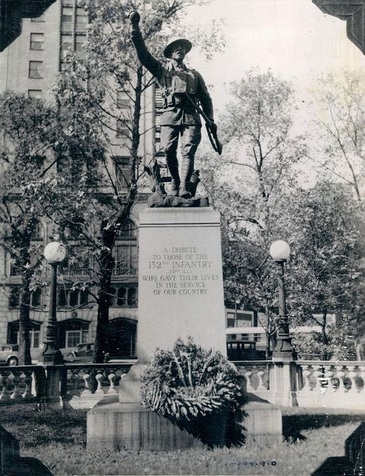 The Doughboy at its original location in Garfield Park, 1939. 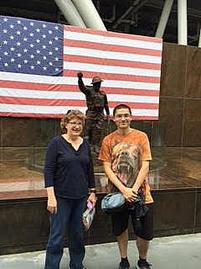 Update August 29, 2016: An August 27, 2016 e-mail sent by site colleague Earl Goldsmith, from his daughter, Jennifer Ho, states that the rifle on the statue is now broken, but is to be repaired soon. Jennifer and son are shown standing in front of the statue. The damage is difficult to see in this photo, but when enlarged, It looked as though the buttstock was gone.

Update:  November 13, 2016: Further info from site visitor Al McCormick and daughter states that the rifle appears to be repaired.