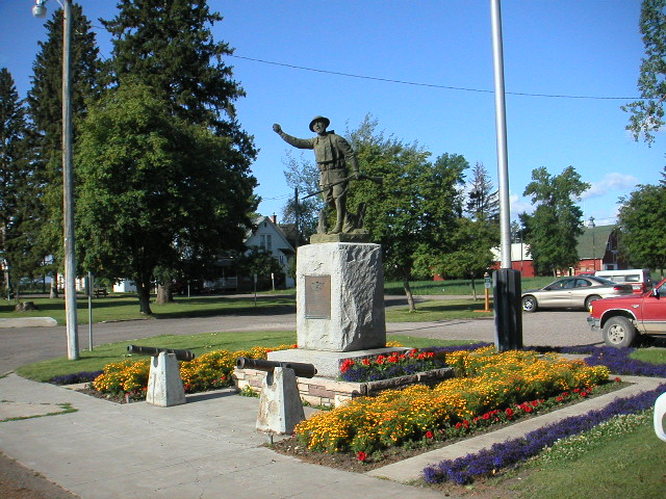 The inscription on the plaque (also produced by Viquesney) reads:

DEDICATED TO THE MEMORY OF
OUR COMRADES WHO ENTERED THE SERVICE
OF THEIR COUNTRY
FROM FLATHEAD COUNTY
AND WHO GAVE THEIR LIVES IN
THE WORLD WAR
---
PRESENTED BY FLATHEAD POST NO. 7 AMERICAN LEGION
NOV. 11, 1928 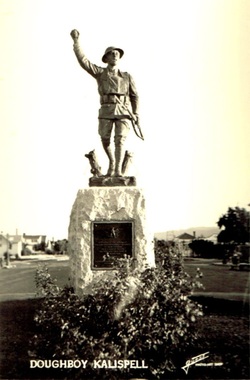 The bronze plaque was illustrated in one of Viquesney’s promotional brochures.

Two small cannons at the base and a flagpole were added when the statue was moved.

The rifle sling is missing and the rifle barrel is bent downward. There is a lot of discoloration, and the sculpture would benefit from cleaning and other restoration work. The right arm is also bent forward.

The photo at left, taken in 1963, shows the Doughboy before its move from Kalispell, with the rifle and right arm in their original condition. The subsequent damage occurred only a few years later, before the move to Columbia Falls.
The following is from a November 11, 2017 article by Lynnette Hintze in the Daily Inter Lake, Kalispell, Montana:

The doughboy has had a home at the Veterans Home since it was relocated in 1972 from Kalispell’s Main Street, where its storied past began in 1928.

The Feb. 4, 1928, front page of the Daily Inter Lake reported the decision made by the American Legion Flathead Post No. 7 to adopt Viquesney’s masterpiece “as a fitting monument to commemorate the Flathead County heroes who gave their lives in the world war.”

American Legion members raised $1,600 by selling countywide public subscriptions to pay for the memorial. A donation of $400 from the Somers community put the doughboy fund over the top, the Inter Lake reported.

The statue was shipped from Chicago in late October so it could be erected in time for an unveiling and dedication ceremony on Nov. 12, 1928, a day after Veterans Day. While the American Legion’s plaque at the base of the statue states it was dedicated Nov. 11, 1928, the big celebration was held the following day, the Inter Lake noted, “inasmuch as Armistice Day this year falls on Sunday.”

The Daily Inter Lake promised that “unusual interest” would accompany the unveiling, and described the excitement of the day.

“They waited expectantly for the moment when the covering should be drawn from the statue, which stands in the center parking, one hand lifted, helmet on head and courage and purpose in every line — perpetuating for all time the spirit of the American doughboy,” the Inter Lake wrote.

The courthouse area of Main Street was closed to traffic as spectators crowded in to see the unveiling as the American Legion band played “The Long, Long Trail.”

The statue was mounted on the meridian north of the courthouse and for the next 44 years was a static centerpiece to the town that grew up around it.

As it turned out, though, the statue’s location became a precarious post for the doughboy. Time and time again, errant motorists collided with the statue, and every time the Inter Lake was there to report the mishaps.

“Doughboy Again Felled by Auto” was the front-page headline on Feb. 14, 1952, that described how Eddie Geddes of Kalispell struck the heavy pedestal and knocked the doughboy off its base. Geddes suffered a broken nose, rib fractures and other bruises. In that story the Inter Lake noted how six years earlier Betty Wittlake, a passenger in a car that hit the statue, died from her injuries three days following the crash.

By Feb. 1, 1953, the Inter Lake took an editorial stand, saying “The Doughboy is a Hazard.” The editorial stated that the doughboy, “at its present location in the middle of the street, has become peculiarly attractive to automobiles and has been toppled several times by drivers who failed to see it in time.”

The newspaper editor strongly suggested that city officials and the American Legion consider moving the famed statue farther south on Main Street or in the courthouse park.
The very next month, in March 1953, another photo of the toppled statue was on the front page with the headline “Here we go again…”

Just before Memorial Day in 1953 the Kalispell City Council opted to give the doughboy “one more chance,” agreeing that “if he gets hit again, out he goes.” The council planned to add safety features such as a rubber bumper around the monument to “absorb the shock of the colliding cars.”

But by that time the council was getting pressure from the Kalispell police chief to find a new location for the beloved doughboy. “Kalispell Police Chief Meade James said that the next time there might not be much left to move,” the Inter Lake reported. The chief declared the statue a safety hazard and said it “has been knocked down so many times that it will soon be beyond repair.” So in June 1953 the council voted to move the doughboy one block south — still in the center median of Main Street — between Sixth and Seventh streets near the Courthouse.

The doughboy was the backdrop for ceremonies that ranged from Flag Day presentations to Memorial Day military salutes. On Armistice Day through the years wreaths were placed at the base of the statue.
During the Vietnam War a peace rally was held around the doughboy.

When the state highway department rebuilt U.S. 93 around the courthouse couple, the Main Street median and its rose gardens were removed and a new home had to be found for the landmark doughboy. The state and city of Kalispell planned to have it placed in a triangular plot in front of the courthouse, but World War I veterans and the American Legion lobbied to have it moved to the Veterans Home in Columbia Falls. At the time many of the Veterans Home residents were World War I veterans.

Not everyone on the Kalispell City Council was on board with moving the doughboy out of Kalispell. “The councilmen expressed personal reluctance at moving the statue from the city, but felt the wishes of the veterans, particularly those of World War I, should be given precedence,” the Inter Lake reported July 2, 1972. It passed on a 3-2 vote, with one abstention.

The doughboy was honored with another big celebration and formal dedication at the Columbia Falls site.
Eleven years ago there was some interest in returning the doughboy to Kalispell as Chuck Olson and Jack Heller wanted to have a veterans statue in Depot Park.

They inquired at the Veterans Home about relocating the statue to Kalispell, but backed away from that idea when they learned Veterans Home residents were firmly opposed. “We didn’t want to upset the vets,” Olson told the Inter Lake in 2006. “So we decided we wanted to have a new memorial in Kalipsell.”
Update November 11, 2018: After a complete refurbishment by Acutech Works of Columbia Falls, the Doughboy was rededicated in a short ceremony at the Veterans Home. The restoration effort was led by Mike Shepard, former commander of both the Columbia Falls and Whitefish American Legion posts.