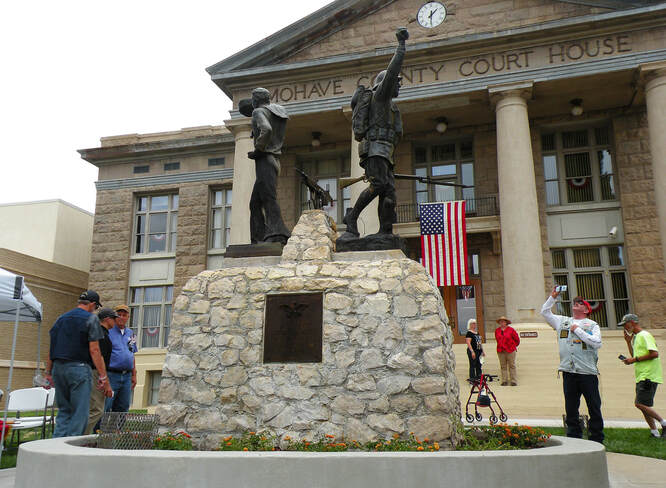 The inscription on the plaque (below the eagle relief) reads:

IN MEMORY OF
THE MEN AND WOMEN
OF MOHAVE COUNTY
WHO SERVED IN THE
WORLD WAR
1917 – 1918
A plaque dedicated November 11, 1997 at the foot of the base honors Korean-era Veterans. 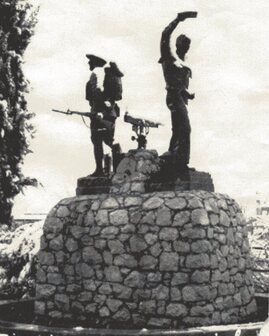 The original Colt 1895 machine gun in 1928.
Dedicated May 30, 1928 at the Mohave County Courthouse. A goldfish pond that was once at the base is now filled in and planted with flowers. A Colt 1895 machine gun was originally mounted on the raised part of the base between the two figures. Its disappearance has been the subject of news articles containing speculations about when it vanished. While it was missing in a 1997 picture that appeared in the Daily Miner, it was reported as being present at the time of a 1993 survey of outdoor sculptures.

​Five other metal "Spirit of the American Navy" sculptures accompany Viquesney Doughboys at Clearwater, Florida; Naperville, Illinois; Fort Wayne, Indiana; Granite and Hobart, Oklahoma. A stone version occurs at Crowell, Texas. A similar tribute to the Navy, titled "Sailor", occurs at Palatka, Florida, but although placed by Viquesney, it was not sculpted by him. 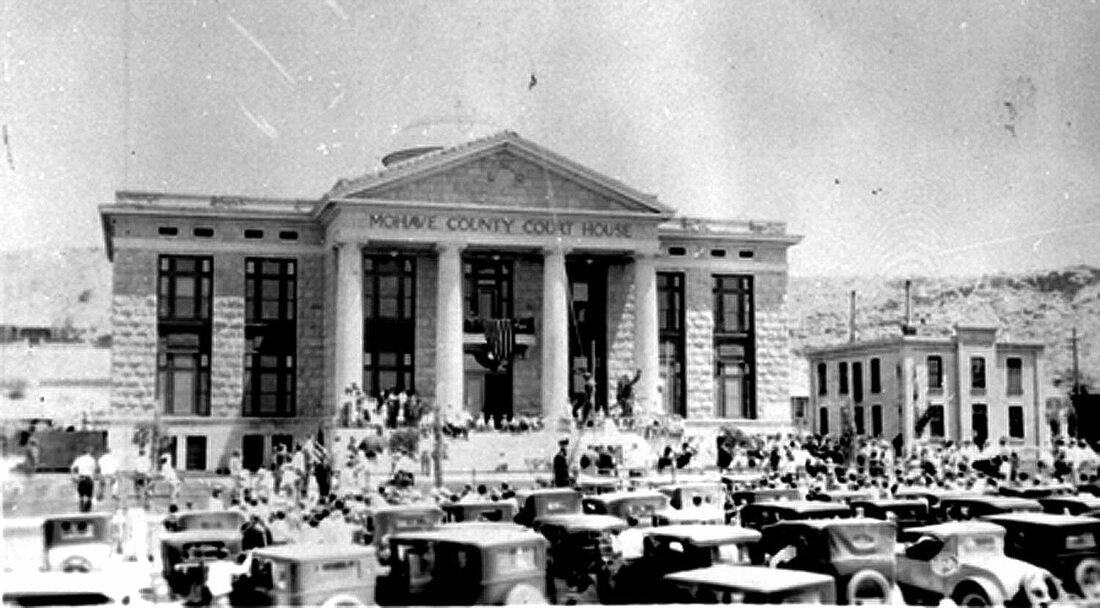 ​[Portions below, describing the original 1928 dedication, are excerpted and edited from an online article by The Standard, and credited to the City of Kingman.]

The Memorial Day event started at 9:30 a.m. with a parade from the firehouse at Fifth and Beale Streets. The parade made its way to the Mohave County Courthouse by 9:45. The new memorial was erected to honor the men and women who served from Mohave County. The parade was led by Ed Wishon, the commander of the local American Legion No. 14, Swaskegame Post and Vice Commander of Arizona McFarland. At 10 a.m., Mr. Wishon performed as master of ceremonies for the dedication. Honorable Ross H. Blakely invoked the dedication of the monument.

The base for the WWI monument was started a few weeks earlier. Several local men volunteered to build the base. Ora Gruninger, who donated his time, supervised the work. Seven locals donated $5 each to the project and more donations came in. The base cost about $150, the monument cost about $2,650 ($1,000 apiece for the two statues, and the remainder for the machine gun, bronze plaque, and landscaping). The statues were shipped from Chicago on May 1, 1928.

Update June 29, 2019: A rededication ceremony was held in commemoration of the 101st anniversary of the battle of Belleau Wood, and featured the replacement of the stolen Colt 1895 machine gun with a bronze replica created by artist/sculptor Clyde Ross Morgan of Sedona, Arizona.

The rededication was sponsored by the Arizona Military Order of Devil Dogs Charities of the Marine Corps League and the citizens of Mohave County, under the direction of Bob Wallace, Lt. Col., USMC Retired.

Update September 7, 2919: MODD Charities directors are proceeding with Phase II of the restoration of the WWI monument in Kingman.

During Phase I it was discovered that the left wrist of the Doughboy statue was broken almost half way through.  There wasn't sufficient time to make repairs before the scheduled rededication ceremony so it was decided to make the repairs at a later date.

Also the restoration work that was done to remove the accumulated alkali and silica coating on the statues did not leave a consistent, uniform finish. Thus it was arranged for Peterson Creations (the foundry that assembled and applied patina to the machine gun) to come to Kingman to repair the wrist and completely refinish the entire two statues and monument plaque. 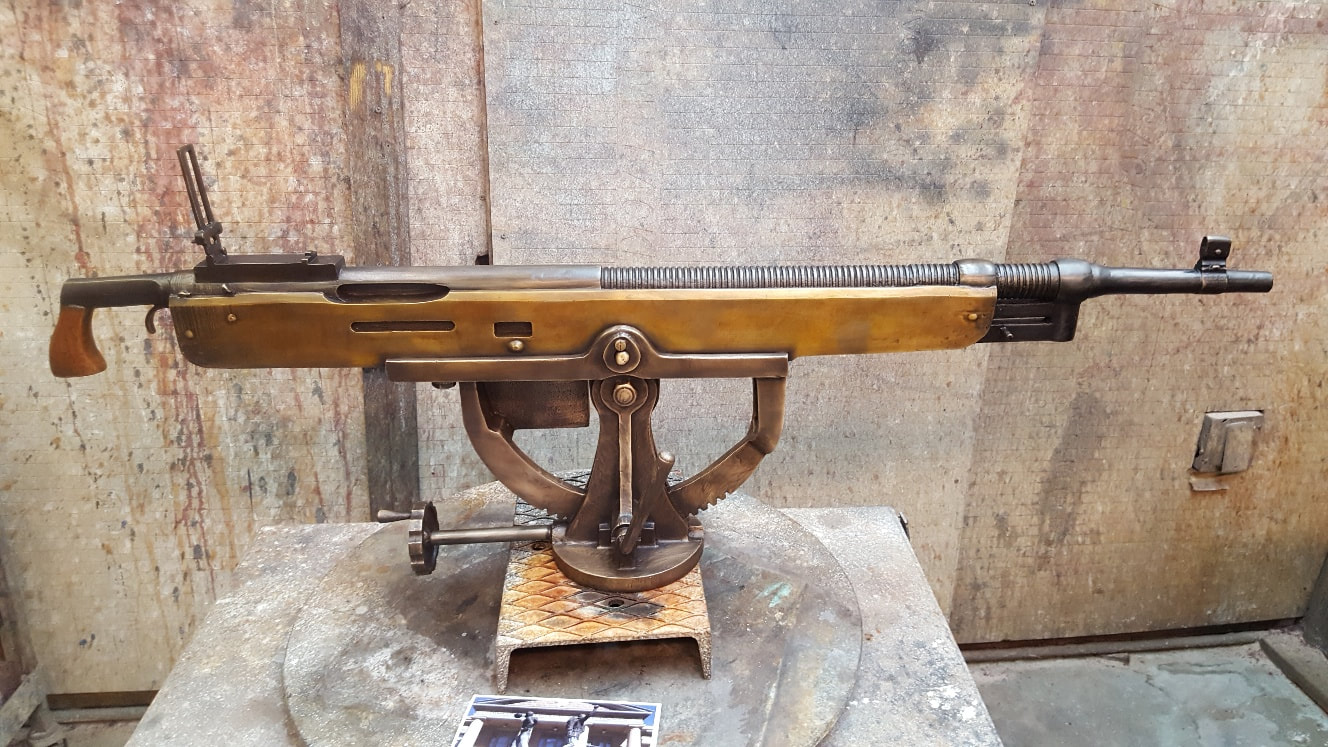 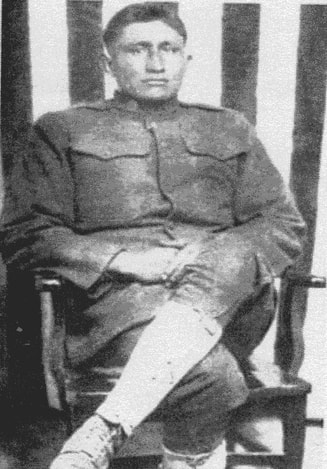 Photo: Mohave Museum of History and Arts.
The 2019 ceremony also honored the memory of Native American Kingman resident Sam Swaskegame, a member of the Hualapai Tribe, who was killed in action at the Marne River campaign battle of Blanc Mont, France on October 7, 1918, only 35 days before the end of WWI. 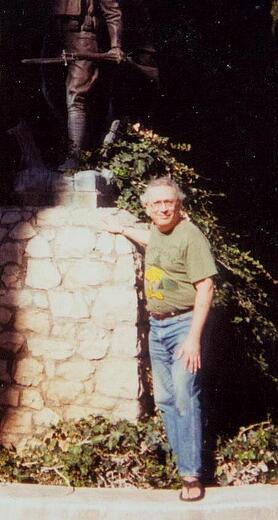 Les Kopel at the Kingman, AZ, Doughboy.
The Doughboy (and Sailor) at Kingman, Arizona, was the first E. M. Viquesney monument I visited in 2003, shortly after I published the first version of this website. I have since visited many others.