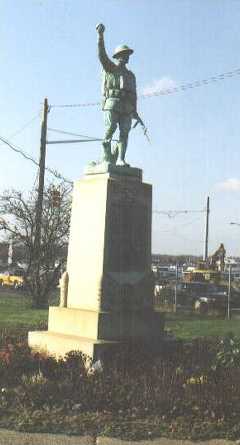 In Doughboy Park, in Memorial Field at West Railroad Avenue between 7th and 8th Avenues, on a pathway under the new Route 35 bridge.

The plaque inscription on the front reads:

1914-1918
---
DEDICATED
IN HONOR OF THOSE WHO
ENTERED THE SERVICE
OF THEIR COUNTRY
FROM
BELMAR, NEW JERSEY
AND
IN MEMORY OF THOSE
WHO GAVE THEIR LIVES
IN THE WORLD WAR
--
PRESENTED BY
THE CITIZENS OF BELMAR, NEW JERSEY
(followed by names of Mayor and Commissioners)

A plaque on the rear of the base contains 102 names.

Dedicated May 30, 1930 across the street from a building that housed American Legion Hall until 1933 and then Belmar Community Center/Borough Hall/Municipal Building until they moved to a new Center on Main Street. The building is still there, but now used for other purposes.

In 2002, a project was initiated to refurbish and relocate the statue, and on November 11, 2006, it was rededicated at its new location above (not too far from its old location, actually).

Photo provided by Nick Mihalic.
Above:  The Belmar Doughboy dedication ceremony in front of the old American Legion Hall on May 30, 1930. After the Legion moved from the building in 1933, it served as the Belmar Community Center (Borough Hall or Municipal Building) from 1938 until a new center was built on Main Street. The building now has other uses, including a seasonal restaurant.
Thanks to Tim McMahon, Fair Haven, New Jersey historian and Doughboy aficionado who has helped with information about various New Jersey Doughboys.
Update June 13, 2017: The statue was vandalized and badly damaged. The Belmar Historical Society plans to organize a fundraising campaign to pay for the repairs.

Update May 8, 2018: The Doughboy is being taken down and sent to Seward Johnson Atelier in Hamilton for repairs at a cost of $18,000. The left hand and rifle will be restored using a cast from the Viquesney Doughboy statue in Fair Haven, which itself has a replaced left hand and rifle.

Update July 19, 2018: The statue is being returned to its base on July 27, with a homecoming celebration.