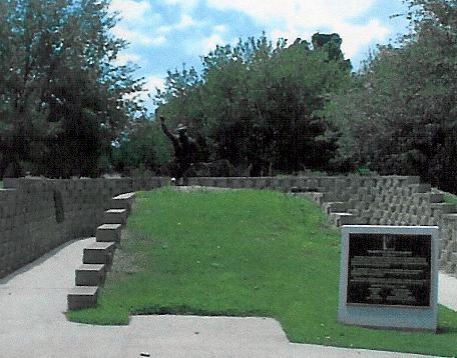 In Memorial Park at corner of Wayne and Washington Streets.

There are four plaques at the monument, two of which directly concern or describe the statue.
The center plaque reads:

This statue was reproduced from molds of the original work and erected on
November 11, 2002 on behalf of the citizens of South Carolina in memory of the 64,739
South Carolinians who served and the 2,085 who were killed in action or died of disease
or other causes during the Great War.
“Soldier rest!  Thy warfare o’er
Sleep the sleep that knows no breaking.
Dream of battle fields no more,
Days of danger, nights of waking.”

- Sir Walter Scott
A marker at the front of the monument reads:

"The Spirit of the American Doughboy"
E. M. Viquesney
(followed by three paragraphs describing trench warfare and the contribution of the allied effort to win the Great War.)
The dedication at the bottom of this plaque reads: 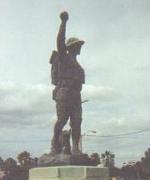 As noted above in the plaques, this is a cast bronze copy produced by sculptor Frank Colson, using molds made from the Clearwater, Florida, Doughboy (left), and dedicated November 11, 2002.

This is not the real (sheet bronze) Viquesney Doughboy dedicated November 11, 1930 and still present in the Olympia section of Columbia.
A small mound has been placed in front of the Doughboy to give the appearance of coming out of a trench (going “over the top”) and the statue is encircled in large heavy metal coils representing obstacles of “no man’s land” while also discouraging attempts at vandalism (which apparently did no good; after substantial vandalism in 2006, the statue was repaired in time for Memorial Day ceremonies that year).
Thanks to Kevin White, Associate Editor of the Historical Marker Database, for the Rootsweb link (but which lists the location as Olympia Mill, the location of the real Viquesney Doughboy in Columbia).