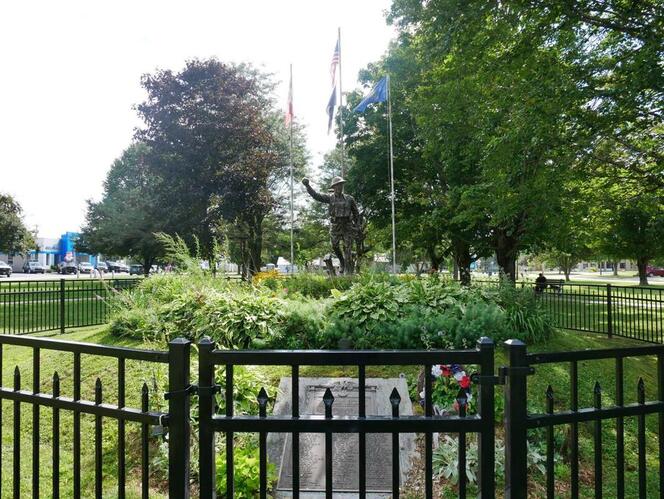 A nearby plaque on the ground at the bottom of the mound in front of the Doughboy was placed in memory of veterans who served their country in the World War and contains a list of names of soldiers.

IN HONOR OF THE VETERANS OF
ENOSBURG VERMONT
WHO SERVED THEIR COUNTRY IN THE
WORLD WAR
ERECTED BY  ENOSBURG POST No. 42
AUXILIARY UNIT No. 19
AMERICAN LEGION
DEDICATED 1930
The plaque information was supplied by Janice Geraw, Enosburg Historical Society.

The Doughboy was dedicated November 11, 1930 in a dedication ceremony that was reported to have been attended by thousands.

The rifle and bayonet were stolen in the 1960s. A replacement rifle was donated by Ray and Sandy Ferland in May of 2014. Otherwise, the Doughboy has been reported to have been well maintained. It appears from photographs that the mound and the plaque could benefit from some attention, though.

The information below was supplied by Donald J. Miner of the St. Albans Historical Museum. 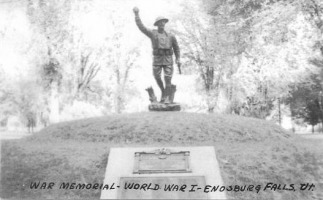 Photo provided by Janice Geraw,
Enosburg Historical Society.
Enosburg Falls fulfilled its ambition to erect a World War I memorial on November 11, 1930, when it unveiled and dedicated a Viquesney Doughboy in Lincoln Park in the center of the Village. The Enosburg Falls American Legion Post No. 42 was in charge of the dedication which was attended by several thousand people. The monument is dedicated to the eighty-one men of the Village who answered the call to colors in 1917 - 1918.

The ceremony began at 2:00 p.m. with the Enosburg Falls Band leading the gathering in singing "The Star Spangled Banner". A prayer was offered by Dr. A. R. Bill, Chaplain of the Grand Army of the Republic, Enosburg Post, and one of the community's two surviving Civil War veterans. Commander John B. Wood of the St. Albans Legion spoke earnestly about what the American Legion meant to the Nation. He was followed by Norwich University President Charles A. Plumley, who delivered a patriotic address which was described by a number of those present as "the most eloquent address ever heard in this town". It was met with great applause. Following Mr. Plumley, a number of vocalists sang songs appropriate to the occasion. They were: Miss Benoit, the Messrs Mason and Ostrosky, Jason Wallace, Miss Ruth Soule, Miss Ruby Kendall, and the Missisquoi Male Quartet of Swanton. At the close of the event, the Enosburg Band led a chorus in singing "My Country 'Tis of Thee". The local American Legion Post brought the day's activity to an end with a fair and a dance.
Update May 13, 2020: The area around the statue received a landscape upgrade.
Update Nov. 10, 2021: The statue received repairs, including closing a tear in the proper left shoe.