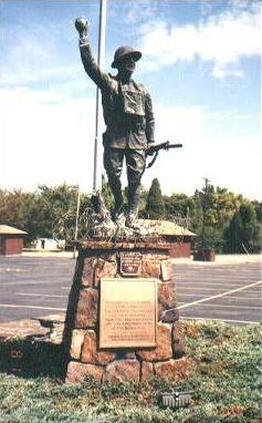 DEDICATED TO THE MEMORY
OF OUR COMRADES
WHO ENTERED THE SERVICE
OF THEIR COUNTRY
FROM FORT SMITH, ARKANSAS
AND WHO GAVE THEIR LIVES
IN THE WORLD WAR 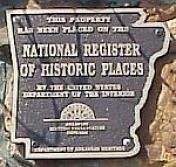 Originally dedicated July 4, 1930 at the entrance to Lewis Tilles Park, but placed in storage in 1979 after substantial vandalism, including destruction of the rifle. After refurbishment by Ralph Irwin of Van Buren, Arkansas, it was rededicated at its current location on Memorial Day, 1998.

There is a very substantial roll of coiled razor-wire placed around the feet to discourage attempts to climb the monument.

The image below, from an old postcard, shows Fort Smith's Doughboy at its original location and on its different, original pedestal at Lewis Tilles Park. 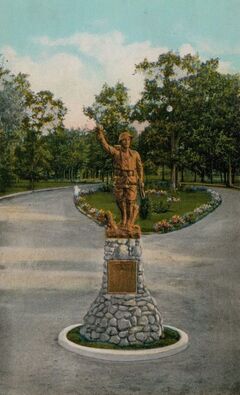 The Doughboy at Lewis Tilles Park.
The following history of Post 31's involvement with the acquisition, placement, and dedication of the Ft. Smith Doughboy was kindly provided by Flickr.com member sunnybrook100 (she has also logged an entry for this sculpture at the Historical Marker Database):

Ellig-Stoufer American Legion Post 31 (named in part after Victor Ellig, the first soldier from Fort Smith, Arkansas to be killed in WWI) was always heavily involved with creating and promoting parks and playgrounds in Fort Smith. In 1928, the Commander Henry Armstrong was named permanent chairman of the city's parks and playgrounds commission. A committee was formed then, "investigating the immediate needs of Lewis Tilles children's park." It was at about this time that the post began a drive to install a World War I memorial at Tilles Park. That effort came near fruition in April of 1930, when the Arkansas Legionnaire announced that an "announcement has been made that with the city park board paying $500 of the $1,000 necessary, a lifesize bronze statue of a Doughboy will be erected at the entrance to the Lewis Tilles Children's park, Grand Avenue, as a memorial to the men who served in the World War." The statue had already been ordered, and dedication was planned that summer.

Appropriately, the dedication was scheduled for July 4, 1930. More than 2,000 people gathered at Tilles Park that evening for a ceremony that "including the unveiling and dedication of 'The Spirit of the American Doughboy', the first night tennis match ever held in the city, and a band concert." Mr. and Mrs. O.C. Ellig, Victor Ellig's parents, and several Gold Star mothers were in attendance. Dr. W.R. Brooksher, who led the committee that since 1928 had worked to acquire a World War I memorial, presented the statue to Post 31 Commander John Coley, who in turn presented it to Henry Armstrong of the parks and playgrounds commission. Armstrong then formally presented the monument to Mayor Fagan Bourland. The statue was unveiled by "two little misses," Jo Ann Carroll and Nancy Mae Connor, and the ceremony ended with the singing of "America". The sculpture was described by the Helena World as "the only true representation of the real Doughboy and his indomitable spirit."
An April 2012 video shows the rear end of the rifle sling has come loose, with the sling hanging from the front end.