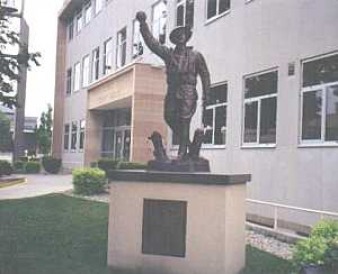 On lawn of Cerro Gordo County Courthouse at 3rd St. NW and Washington.

The plaque on the front reads:

DEDICATED TO THE MEMORY OF
THE MEN WHO ENTERED IN
SERVICE OF THEIR COUNTRY
FROM CERRO GORDO COUNTY
AND WHO GAVE THEIR LIVES
IN THE WORLD WAR
ERECTED BY
LOCAL CHAPER, ORDER OF AHEPA
JUNE 24, 1934

A plaque on the back reads:

The Doughboy was originally at the old location of the county courthouse at 1st and Washington, but was moved to the current site at the new courthouse in 1960. It is in excellent condition and is the site of many patriotic observances.

This was the last of the sheet bronze versions to be placed before Viquesney abandoned that medium in favor of cast zinc in mid-1934. The statue differs from its predecessors in that "SPIRIT OF THE AMERICAN DOUGHBOY" appears on a large plate on the front of the base instead of a small copyright plate on the side of the base near the proper right foot. The copyright plate appears on the back of the base. Viquesney continued this practice of putting the title on the front of the base and the copyright on the back with all his succeeding 1934 copyright cast zinc Doughboys. It's not known whether these features on Mason City's statue were meant to be a first transition to the new 1934 design or whether they were a result of the 1993 restoration.

Nevertheless, at least three sheet bronze Doughboys made from Viquesney's 1920 copyright molds were installed from around 1936 to 1941, at Blue Ash and Warren, Ohio, and Vestal, New York. It's apparent that Viquesney's old foundry, Friedley-Voshardt, kept the 1920 molds and sold Doughboy statues made from them after Viquesney switched to another foundry. Whether the artist knew about or authorized these copies is unknown.