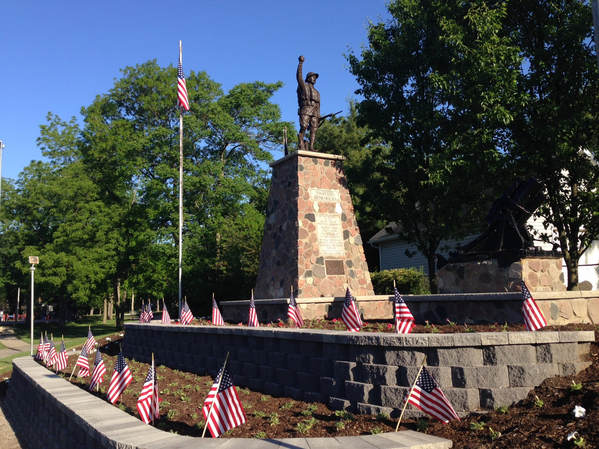 In Swanton City Memorial Park near intersection of Bassett Avenue and South Main.

Two plaque inscriptions on the front of the base read:

Dedicated Monday July 5, 1926 – July 4 was on Sunday. The monument, the only WWI memorial presented to an American town by a foreign government, was a gift of the French people in recognition of the proportionately high number from Swanton who gave their lives (12 of the 250 who served). The French Embassy sent a telegram to the dedication ceremony.  A record of the names of the twelve who gave their lives hasn’t been located.
The Doughboy’s rifle was vandalized several times through the years, and what was left of it was finally removed in 1983. A coat of gold paint was applied at that time, but most of that has worn away. The sculpture could benefit from some restoration treatment.
The cannon on a base in front of the Doughboy is a captured German World War mortar that was a gift of the U. S. government prior to the Doughboy’s arrival.
Tour of Honor rider Roger Swartout noted the statue was off its base in a July 21, 2014 e-mail. It was there the month before, when visited by Tour of Honor rider Jerry Jones. It turns out the statue was taken down for restoration and was to be returned and rededicated on Veterans Day, but apparently the work by Georgio Gikas of Venus Bronze Works, Detroit, MI, took longer than expected.

Update May 18, 2015: The restored statue was returned to its base and enhanced park area in time for a Memorial Day rededication.

Update February 8, 2016: The Swanton Rotary Club is donating a water fountain to Memorial Park, where citizens may purchase a rock to memorialize loved ones. The fountain is the latest Swanton park enhancement, joining the Spirit of the American Doughboy statue.