In DeBardeleben Park, bounded by 2nd and 3rd Avenues and 16th and 17th Streets.

Originally dedicated November 11, 1922 at the corner of 19th Street and Carolina Avenue and moved to its current location when the streets were widened in 1969.

Both sides of the base have honor roll plaques naming those killed or who died in service – 30 on the Doughboy’s left and 14 listed as "Colored" on the right. A rear plaque placed in 1999 reads:
This Doughboy Monument,
Sculpted by E. M. Viquesney was erected
Following World War I, "The War to End All Wars."

The City of Bessemer and
The State of Alabama Historical Park and Historical Site
Maintenance and Repair Grant Program
Restored and preserved this statue
So that future generations may
Remember the struggles and bloodshed that
Preceding generations endured
To protect the peace
And liberties we hold dear.

We especially wish to
Honor the veterans who protected our freedom
With their lives.

January 2011 photos at the Historical Marker Database showed the bayonet seriously bent downward. April 2013 photos at flickr.com and those above show most of the bayonet is now broken off.

Update May 4, 2015: The Bessemer City Council approved up to $2,000 to fix up The Spirit of the American Doughboy Monument at Debardeleben Park. The monument will have to be moved from the park while it's repaired. Sculptor Branko Medenica will renovate the monument, according to the city. 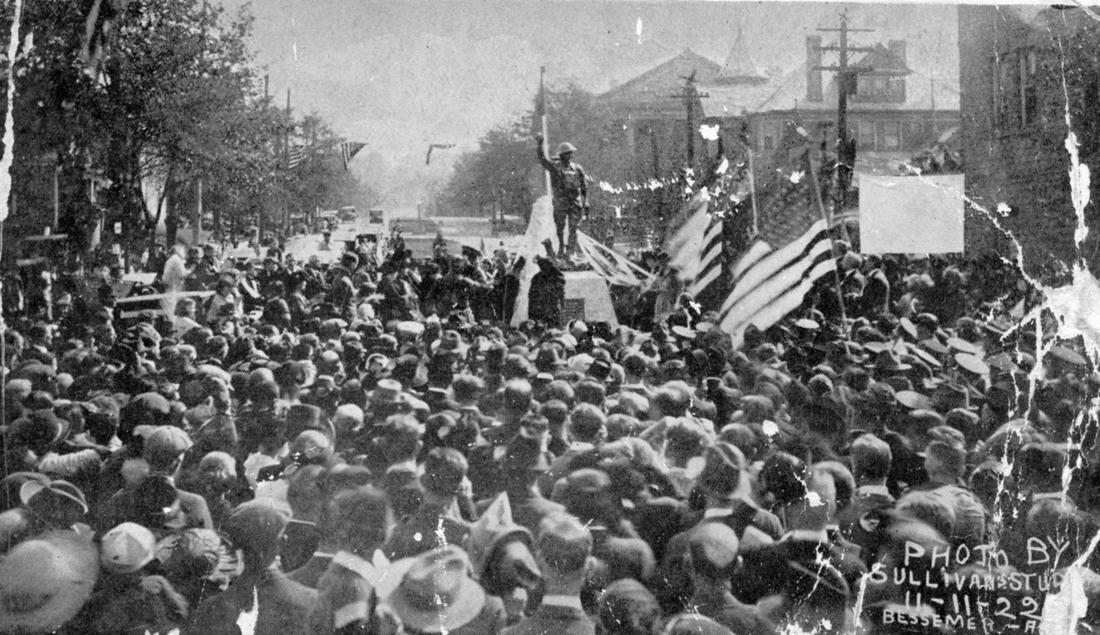 Photo: Bessemer Hall of History Museum.
Above: The November 11, 1922, original dedication of the Bessemer Doughboy.