The engraving on the upper level of the front of the base (below the eagle) reads:

HONOR ROLL
DIED IN SERVICE
(followed by list of names)

And below that on the second level:

LEST WE FORGET
THOSE FROM BLACKFORD COUNTY WHO
ANSWERED THEIR COUNTRY’S CALL IN THE WORLD WAR
APRIL 6TH 1917 TO NOVEMBER 11, 1918

Engravings on the sides of the base read:

OUR BOYS
(followed by lists of names)

And on the back of the base:

WHEN THE SERVICE FLAG HAS FADED
AND THE HANDS THAT IT CARESSED
HAVE BEEN FOLDED CALM AND PEACEFUL
ON EACH MOTHER’S LOVING BREAST,
“THE TORCH THEY PASSED UNTO US”
WILL WE BEAR FOREVER ON,
WITH OUR LIVES WE WILL DEFEND IT
-WE, LIKE THEY, WILL CARRY ON.
(followed by list of names)

The Doughboy was acquired with funds raised by public subscription and a substantial contribution from the ladies of the Service Star Legion.  It was dedicated September 28, 1921, and was the third Doughboy to be erected.

At a point in the past, an entire missing arm was replaced.  While the rifle sling is now missing, the sculpture is otherwise in a well-maintained condition.

Below: An old postcard view of the Doughboy, probably taken shortly after its installation. 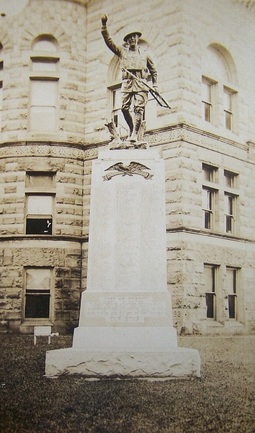