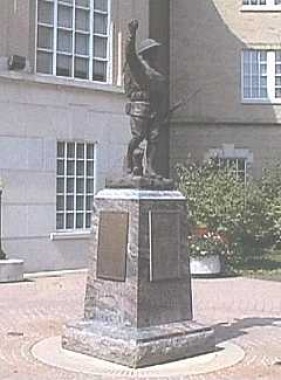 Located in plaza area in back of Pike County Courthouse, 146 Main St. The statue was originally installed in front of the courthouse near Main Street in November, 1932, but was moved to its current location in 1992. Thanks to site visitor Brad Slone, Deputy City Manager of Operations, City of Pikeville, for the information pertaining to the move.

The plaque inscription on the front of the marble base reads:

LEST WE FORGET
The statue has plaques on the four sides of the base listing service men killed during each of World War I, World War II, the Korean War, and the Vietnam War. 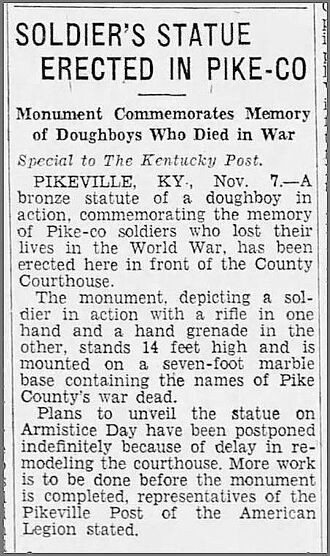 Kentucky Post and Times-Star, 11/7/1932
The newspaper article at left, supplied by Brad Slone, shows the Doughboy was installed as of November 7, 1932, and was supposed to be unveiled and dedicated on the following 11th, Armistice Day (now Veterans Day), but the actual date of unveiling and dedication was postponed due to ongoing courthouse construction at the time and is still unknown.

The Smithsonian record states an installation year of 1920, which is not only incorrect, but not even possible, since the first Viquesney Doughboy statue wasn't manufactured and installed until June of 1921.  Also, the copyright mark bears the name Spencer, Indiana rather than Americus, Georgia.  Copyrights displaying Spencer didn't appear until 1926 or 1927, after Viquesney reacquired the rights to his Doughboy company from his former business partner in Americus, Walter Rylander.