In front of Edward Hand Middle School at 431 South Ann Street. Formerly at Pennsylvania National Guard Stahr Armory, 438 North Queen Street. The sculpture was moved back to its original location in front of the school on June 12, 2013.
The Smithsonian Institution IAS file has two records for this statue. The one submitted by T. Perry Wesley (47260095) is the more complete but still lists the old location at the armory; the other (76008146) bears minimal information and could be deleted by the Smithsonian.

DEDICATED TO
THE MEN AND WOMEN
OF THE SEVENTH WARD
LANCASTER, PA.
WHO BY THEIR PATRIOTISM
COURAGE AND DEVOTION
HELPED WIN
THE WORLD WAR
1914 – 1918
FOR HUMANITY, LIBERTY AND RIGHTEOUSNESS
ERECTED BY THE
CITIZENS OF THE SEVENTH WARD

The Doughboy was originally dedicated November 11, 1925 at East End Junior High, now known as Edward Hand Middle School, in a ceremony in which the Lancaster Gold Star Mothers, American Legion, Knights of Malta, and students of the Junior High, played prominent roles. It was unveiled by three Gold Star Mothers, and tribute was paid to the 482 men and women of the Seventh Ward who served during the war. It was purchased with funds raised by public subscriptions of residents of the Seventh Ward, and had been in Lancaster nearly a year while an appropriate site was selected. The Doughboy was moved to the Stahr Armory location in 1962. The doughboy's arms and rifle barrel have been cut off and replaced. By 1986 it had lost its right hand and grenade. They were restored. In 1992, vandals pushed the whole sculpture off its base and onto the grass. But currently, the statue appears to be in very good condition.
Above, left - Lancaster’s Doughboy at its original East End Junior High School site. Right – The three Gold Star Mothers who unveiled the Doughboy: Mrs. Elizabeth Kiehl, Mrs. D. S. Vollrath, and Mrs. M. E. Hambleton. Below:  The Lancaster Gold Star Mothers and others at the Doughboy’s November 11, 1925 unveiling.

Photos provided by Phillip Crnkovich of the Lancaster Area Library.
On June 12, 2013, The statue was moved back to its original Seventh Ward neighborhood location on South Ann Street after 51 years. The Armory was put up for sale and the City of Lancaster did not want the statue to be sold with the building and possibly lose this historic treasure. Because the statue had been in front of the Armory for 51 years, legally the City no longer owned the statue. The City's Public Art Manager contacted the Pennsylvania Department of Military and Veterans Affairs (the property owner) to negotiate the return of the statue to the City. A public meeting was held at Edward Hand Middle School to discuss moving the statue back to its original location in front of the school. All attendees were in favor of returning the statue to the school and the decision was subsequently approved by a School District of Lancaster School Board vote. The return to Hand Middle School was prompted by the South Ann Concerned Neighbors group. The new location was carefully selected because of its close proximity to the school, ample lighting, and two surveillance cameras mounted on the school that survey the area surrounding the statue.
A rededication ceremony was held on October 15, 2013 at 1:30 pm. Those attending included Mayor J. Richard Gray, City of Lancaster; Brigadier General Carol Eggert, Assistant Adjutant General, Joint Force Headquarters, Pennsylvania National Guard; the Red Rose Veterans Honor Guard; the South Ann Concerned Neighbors; and the students of Edward Hand Middle School. 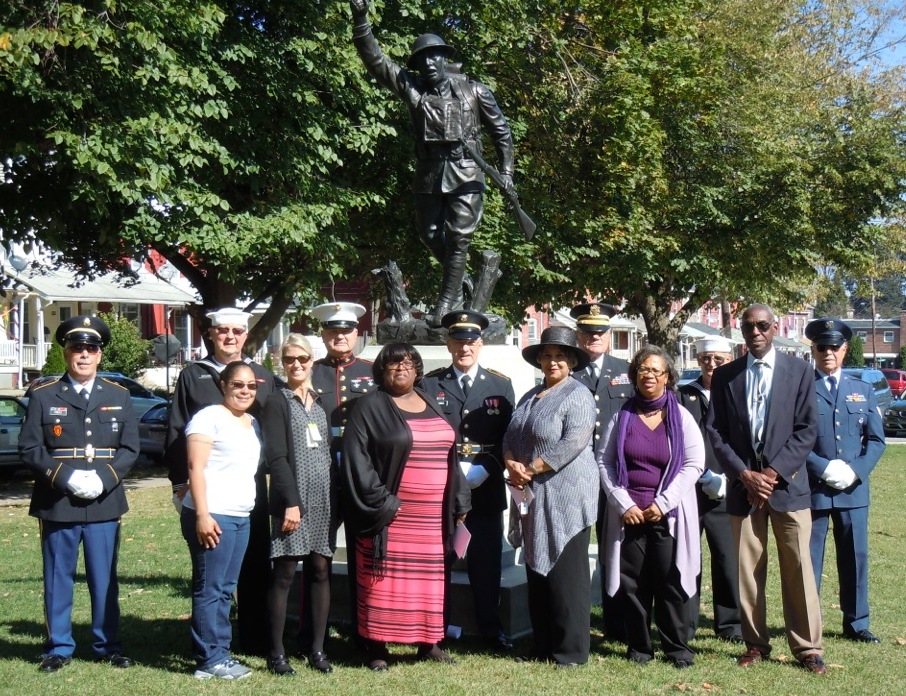