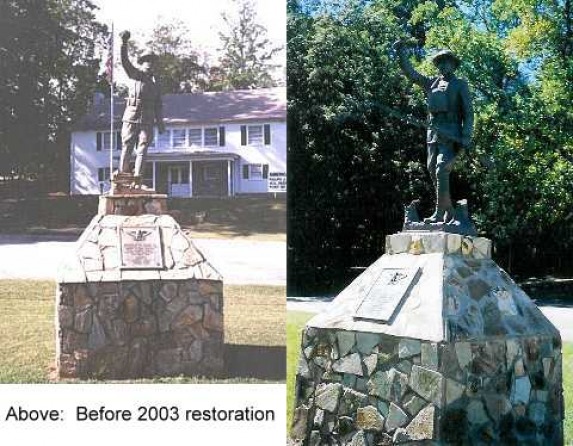 DEDICATED TO THE MEMORY OF
OUR COMRADES WHO ENTERED THE
SERVICE OF THEIR COUNTRY
FROM ANDERSON COUNTY
AND WHO GAVE THEIR LIVES IN
THE WORLD WAR
-----------------
PRESENTED BY
W. A. HUDGENS POST No. 14,
AMERICAN LEGION
NOVEMBER 11, 1934
There are three large stone memorials in line with the Doughboy, honoring World War I and II, Korean, and Vietnam veterans, and General Robert Anderson, a Revolutionary hero for whom the town was named when it was founded in 1827. 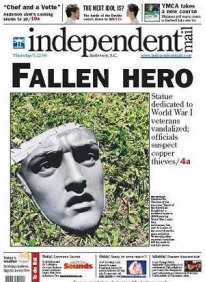 Independent Mail headline.
A few days before Memorial Day, 2008, the statue was destroyed by apparent metal thieves who possibly thought the statue was copper, and who just left it lying on the ground when they discovered it was zinc. A $5,000 reward was offered for information leading to the arrest and conviction of the vandals.

The pieces of the statue are currently stored in the Anderson County Museum, 202 East Greenville Street, and may possibly be restored and put on display in a new permanent military exhibit, but that will not open until at least the fall of 2020, due to the cost of repairing the statue.

Unfortunately the statue was one of only four made in 1934 that had the "closed mouth" design. The original 1920 version, and those made in 1935 and later, have an open mouth with teeth showing.