In the southeast part of Rees Park, bordered on the north by Taylor Street, the west by Elm Street and the east by Rees Street.

SUMTER COUNTY
AFFECTIONATELY REMEMBERS
HER SONS WHO DIED, AND THOSE
WHO OFFERED THEMSELVES, AS
WILLING SACRIFICES IN THE
CAUSE OF OUR COUNTRY.
1917     WORLD WAR     1918

Originally dedicated November 11, 1921, at the intersection of Lee and Lamar Streets. Viquesney was present but had no role in the ceremony. The statue was moved to Rees Park in 1947, and now stands about two blocks from Viquesney's residence in 1920, according to Facebook visitor Evan Kützler. It isn't the original Doughboy; that one was placed at Nashville, Georgia in July or August 1921, and it isn't the first to be permanently placed on public display; that one was dedicated on the Furman University campus at Greenville, South Carolina June 7, 1921.

The statue stood almost directly in the path of the devastating F3 tornado that struck Americus on March 1, 2007. Miraculously, it survived unscathed, while foot-thick trees around it were snapped in half like toothpicks. 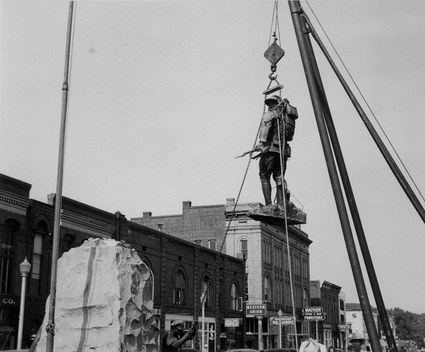 The July, 1947 move from the intersection of Lee and Lamar Streets.
Photo courtesy of Sumter Historic Trust, Inc., from the collection of Mike Saliba.
E. M. Viquesney came to Americus, GA, in 1905 to work on the large Civil War monuments in the area, first employed by Clark's Monument Works and later Schneider Marble Company. In 1911, he designed the building and vault for the Soldiers and Sailors Monument (completed in 1913) that stands in Wichita, KS, and in 1919, he invented a new type of above-ground burial vault, patented the following year.

But it was in 1920 that Viquesney copyrighted what would become his most famous work, "The Spirit of the American Doughboy". After the first statue was completed and put on temporary display in the lobby of the Rylander Theatre in March of 1921, public interest was great enough so that the following June Viquesney began producing a miniature 12-inch desktop version which became popular, particularly among the veterans who had recently returned home from the World War.

However, possibly in response to a 1922 lawsuit on behalf of rival sculptor John Paulding, Viquesney, who had only just begun his new Doughboy venture, sold the entire company to his business partner, Walter Rylander, the owner of the Rylander Theatre and Ford auto dealership building next door to it. Mr. Rylander subsequently owned the rights to the Doughboy for four years before returning the company to Viquesney in January of 1926. Throughout the time Rylander owned the rights to the Doughboy, he produced some of the desktop miniatures in a back room of his auto dealership building. Rylander had plans to shut down production of the miniatures from factories in the northwest and concentrate their manufacture in Americus, but Viquesney was able to buy back his company before this could happen.