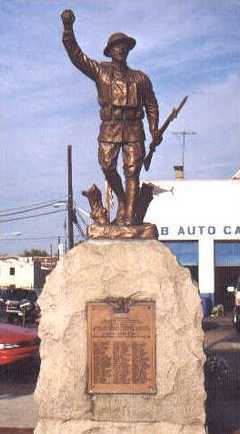 In small Arnesen Square, in triangle at Madison, Fayette and New Brunswick Avenue.

Another plaque inscription on the base reads:

A shorter nearby stone has an affixed legend that reads:

VETERANS MEMORIAL PARK
In Honor of All War Veterans
(along with another plaque in memory of Robert “Arne” Arneson
that mentions a July 19 1997 rededication.)

Funded by public subscription, the Doughboy was dedicated November 11, 1930, originally on the corner of Amboy Avenue and Pfeiffer Boulevard on a piece of land between Pfeiffer and Waltrous Lane (now Waltrous Avenue).  It was unveiled by Miss Marie Kilmurray, a daughter of a veteran who had died of injuries received in the war.  The statue was moved to its current site around 1979.

While the rifle sling and barbed wire are missing, the Doughboy is in outstanding condition, and might have been refurbished as recently as the 1997 rededication mentioned on one of the plaques.