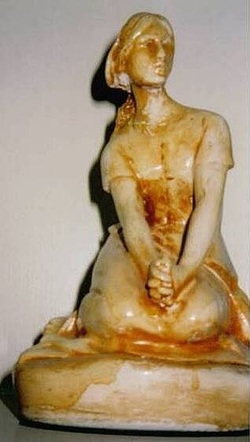 Photo: Harlan Ogle, Monticello, Kentucky.
Viqnesney often produced his own miniature versions of sculptures done by other artists, both living and dead. This miniature of Joan of Arc, portraying the subject as a peasant girl listening to her voices, was directly copied from an 1872 marble version by Henri Chapu.

This Viquesney piece is in a collection at Spencer, Indiana. There is no title on the front. The piece was in a glass case at the time this photo was taken, thus no date could be seen, but is probably from the 1930s.